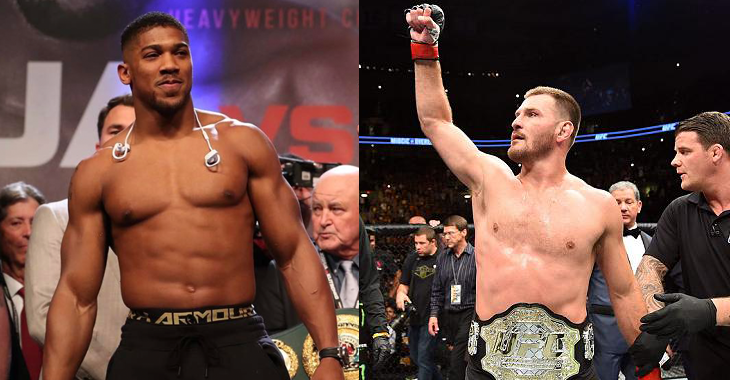 While Joshua, an Olympic gold medalist, boasts an undefeated record of 19-0 that has seen him finish all of his opponents, Miocic is confident that he can hand the 6’6 Englishman his first professional loss. Recently, Miocic called for a fight against Joshua during a recent podcast appearance, saying:

“Oh yeah, 100-percent. I would love to do that. It’d be great. I’d love to fight Joshua. I think that would be an amazing opportunity against an amazing fighter. I think I’ve got what it takes to give him a run for his money—I might beat him. I know he’s tough, but so am I.”

Joshua responded to an article written about Miocic’s callout with a classic Conor McGregor line, writing in the comments section:

“Who the fooook is that guy”

Miocic has now fired back at Joshua for his comment:

So far no word back from Joshua, however as UFC President Dana White stated on his Q&A following the announcement of the Conor McGregor vs. Floyd Mayweather fight, it is highly unlikely that the UFC negotiates another deal to have one of their fighters fight a boxer. With that being said, if Joshua’s previous response to Miocic is any indication of his current frame of mind towards the fight, don’t expect him to push for a fight with Miocic following his recent impressive win over Wladimir Klitschko.

Stay tuned for updates on this potential fight as they become available.