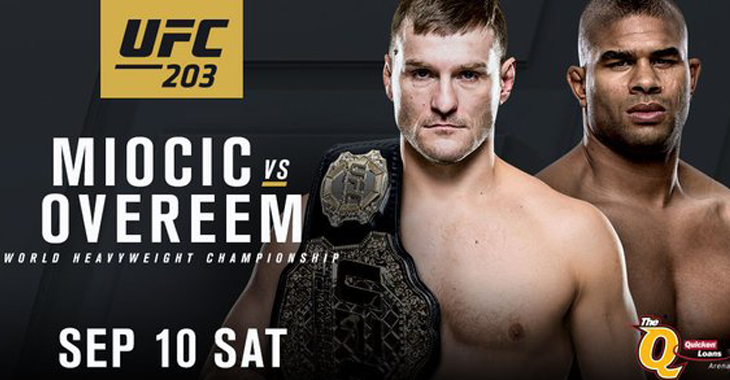 The UFC announced on Wednesday that newly crowned heavyweight champion Stipe Miocic will defend his title for the first time against Alistair Overeem in the main event of UFC 203. The event takes place in Miocic’s hometown of Cleveland, Ohio in the Q Arena.

Nick Kalikas of MMAOddsBreaker.com opened up the betting lines with the champion favored in the bout at -170 and Overeem at +140.

“MMA oddsmaker Nick Kalikas made Miocic a -170 favorite (bet $170 to win $100), with the comeback on Overeem at +140 (bet $100 to win $140) at 5Dimes Sportsbook and opened via ESPN. Overeem has the edge in experience and diversity of striking, and he’ll need to utilize each and ever advantage if he wants to be victorious. Miocic will be a threat with his high pace, high volume combined with crisp boxing and constant pressure standing, in the clinch and potentially with takedowns. Overeem has defeated slightly better opposition, but he’s also been knocked out nine times in his mixed martial arts career and can’t afford to eat a clean shot. Miocic will also be fighting on his home turf, but that comes with bonus responsibilities and distractions. While Miocic is the deserved favorite, the UFC heavyweight championship has proven to be the toughest to defend so nothing is guaranteed.”

Many say the UFC heavyweight title has been “cursed,” as no champion in history has been able to defend the title more than two times in a row.

If you had to, who would you place your bet on with the odds given? Share your pick with us in the comment section.