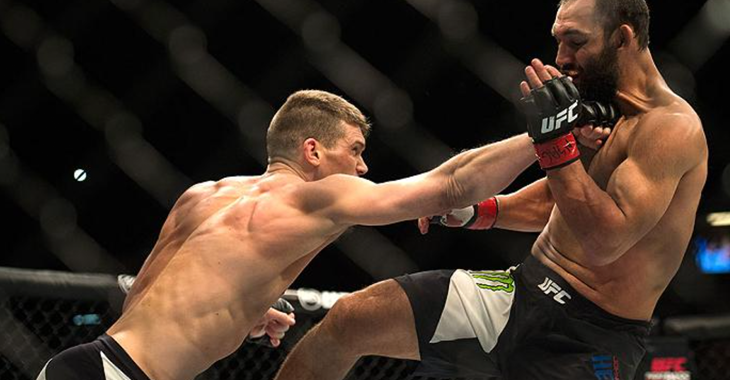 When Stephen Thompson defeated long-time welterweight contender Rory MacDonald back in June, he seemed like a shoo-in for a shot at the winner of Robbie Lawler and Tyron Woodley’s looming welterweight title fight. When Woodley stole Lawler’s belt with a first-round KO, however, Thompson’s immediate future became somewhat nebulous.

Right off the bat, the new champ Woodley began demanding his first defense be a “money fight” with a star like Georges St-Pierre or Nick Diaz, rather than a fight with a hard-working number-one-contender in Thompson. Indeed, there was a stretch when it looked like Thompson would be passed over the title shot, even in spite of his incredible, seven-fight win-streak. Luckily, the UFC got Woodley in line, and awarded Thompson the shot he was promised. The two welterweights are now scheduled to fight for the title at the historic UFC 205 in New York City this November 12.

With this announcement, Thompson has been able to get his training camp underway. How the karate specialist is preparing for this first shot at UFC gold, however, may surprise you.

Of course, he’s logging countless hours in the gym and keeping his nutrition in check. Apparently, however, he’s also been getting comfortable with a UFC belt – a belt that isn’t even his!

As this Tuesday morning Instagram post from former UFC middleweight champion Chris Weidman shows, Thompson has been getting up close and personal with the belt Weidman won by KOing Anderson Silva back in 2013.

Kinda weird when I walk into my guest room and see @wonderboymma cuddling with the belt like a teddy bear 😂. #ufc205 #andnew

“Kinda weird when I walk into my guest room and see [Stephen Thompson] cuddling with the belt like a teddy bear,” the caption on Weidman’s post reads.

Thompson and Weidman, of course, are long-time friends and training partners – so it’s not as though Thompson broke into the middleweight’s house, took the belt of his mantle, and clambered into bed with it.

On the same night that Thompson looks to capture the welterweight title, Weidman will look to rebound from a December loss of his title, when he takes on streaking Cuban Olympian on Yoel Romero. As of now, no main event has been announced for the card, though a lightweight title fight between reigning lightweight champion Eddie Alvarez and reigning featherweight champion Conor McGregor appears to be in the works.

Do you think Stephen Thompson will win the UFC welterweight title this November, as the fight’s betting odds suggest he will? Sound off, PENN nation!