It’s now been almost a year since Ronda Rousey’s shocking, knockout loss to Holly Holm, and the former bantamweight champ has not been seen since. Given the length of her layoff, it’s been widely speculated that her fighting days are done; that the loss not only shattered her perfect record, but extinguished her competitive spirit.

Recently, however, rumors of a Rousey return have begun to swirl. Several reliable sources have suggested that the former champ is poised for a comeback at UFC 207 this December, where she would take on reigning women’s bantamweight champion Amanda Nunes.

In Nunes, Rousey would face one of the few female fighters alive that can match her own proficiency for first-round finishes. Rousey would also probably have to shake off some ring rust in this bout. Given these things, her victory against Nunes is far from a foregone conclusion.

If Rousey does reclaim the women’s bantamweight crown, however, she can then turn her attention to some of the biggest matchups currently available in MMA. One, of course, is a rematch with her recent foil Holly Holm. The other is a showdown with long-time rival and reigning Invicta featherweight champion Cris “Cyborg” Justino, who takes on Lina Lansberg in Brasilia this Saturday.

Though Rousey’s inactivity has nearly smothered our remaining hope for this rematch, the rumors of her comeback – and some recent comments by UFC President Dana White – have fanned that hope back to flame. 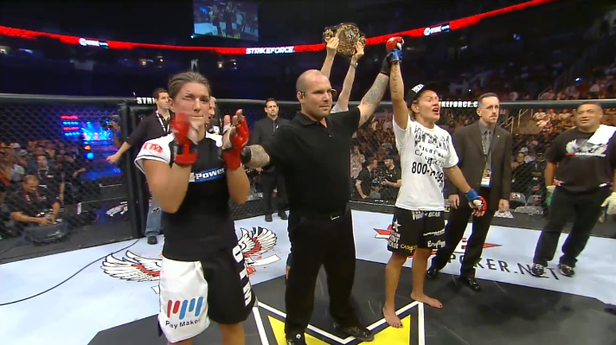 In a recent interview with Globo (transcribed by MMAFighting), White discussed this possible super fight, saying he hopes he can make it happen down the road.

“I think in a perfect world, what everybody would love to see is Ronda vs. Cyborg,” White said to Globo. “So everybody is waiting — I’m sure Cyborg is, too — [for] the return of Ronda Rousey.”

“When she does return, I’m sure [Ronda is] gonna want to fight for the title, probably defend it and then maybe fight Cyborg,” The UFC President continued. “I don’t know. We’ll see how this thing plays out.”

Unsurprisingly, White expects this potential showdown could do huge pay-per-view numbers. Yet it all hinges on Rousey’s making a successful return – if she actually returns at all.

Do you think we’ll ever see Ronda Rousey and Cyborg fight, or is time to let this super fight die? Sound off, PENN nation!