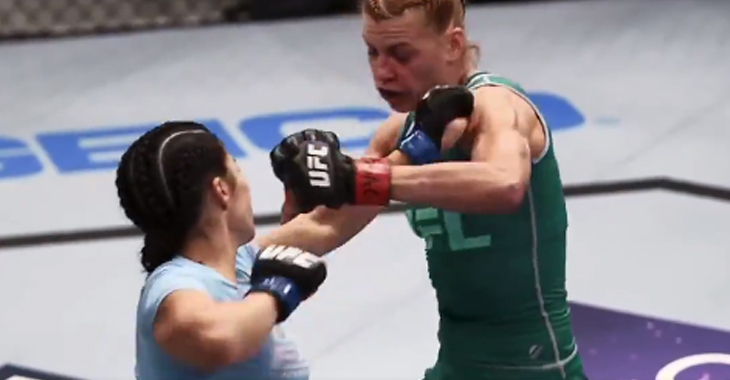 Whoops. Listen, we all make mistakes. As we all know, Twitter still has no edit function. This is a very unfortunate thing for whoever was running the UFC on FOX Twitter account tonight. Meant to be a post to tease and entice would-be viewers into tuning into tonight’s episode of The Ultimate Fighter, they actually spoiled the entire episode by posting a video of complete highlights of the fight between Rachael Ostovich and Michelle Fabian including the finish. We warned with the headline, we’ll warn you again: Stop here if you don’t want to be spoiled.

“When the fight started you could tell right away that Melinda [Fabian] wanted to use that jab and keep Rachael [Ostovich] at bay. Surprisingly Rachael seemed fine on her feet and she ended up landing some good shots. Melinda’s punching and kicks weren’t landing and Rachael was countering with real nice combinations. She was in complete control and eventually Rachael does shoot in and takes Melinda down. Once Rachael sinks in that choke, you just knew it was a matter of time and Melinda ends up tapping. Rachael moves on to the quarter finals with a very solid performance.” — Dana White’s play-by-play of tonight’s fight.

The big social media faux pas aside, this is great news for Rachael Ostovich. While we don’t know who wins the tournament yet, she’s made a good impression on Dana White so far. As a fighter who gained some notoriety in Invicta’s flyweight division, she’ll be looking to win The Ultimate Fighter 26 tournament and be crowned the inaugural women’s UFC flyweight champion. The finale of the show will take place on December 1st.