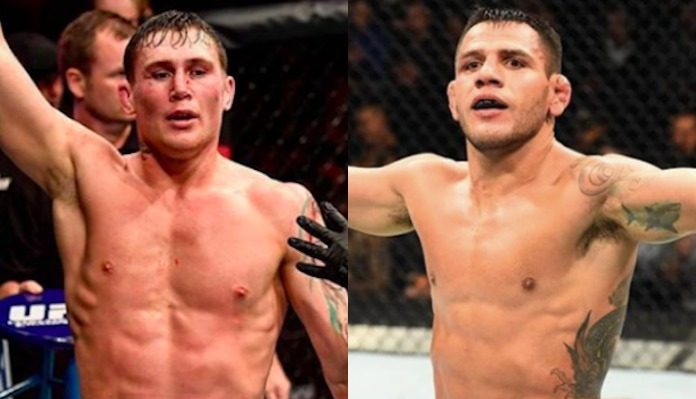 Last weekend, in the main event of UFC Liverpool, Darren Till picked up the biggest win of his career thus far, scoring a close decision victory over two-time welterweight title challenger Stephen “Wonderboy” Thompson. Regrettably, Till’s win was shadowed in controversy, as he missed weight for the bout, tipping the scales three and a half pounds over the 171-pound limit for non-title welterweight fights.

In the opinion of Rafael dos Anjos, who will battle Colby Covington for the UFC interim welterweight title in the co-main event of UFC 225, Till’s struggles with the scale will probably eventually force him up to the 185-pound welterweight division. The recent  behind-the-scenes footage of Till’s weight-cut was all the proof dos Anjos needed to this end.

“He didn’t make weight, after all that,” dos Anjos said at a UFC 225 media lunch (transcribed by Marc Raimondi for MMA Fighting). “And we could not even watch the whole video, right? And he was 3-1/2 pounds over — off the extra pound. If he would fight for a title, it would be 4-1/2 pounds. He’s a great fighter, a young guy. But he’s going to go to 185 eventually.”

Dos Anjos, of course, can sympathize with Till’s struggles to make weight, as he once endured an extremely taxing cut to the lightweight division’s 155-pound limit.

“I passed out three times and I went out and went back,” dos Anjos said. “I did that probably three times. One of the times, I was out for three minutes. I almost, when I fell back on the bathtub, I almost hit the back of my head on the sink. I could have died. And that was a fight that I shouldn’t fight. But everything happens for a reason. I did it and I lost and I learned a lot from it.”

What do you think of Rafael dos Anjos’s comments on Darren Till?