Pedro Munhoz is revealing that he has received threats against his family following his fight with Sean O’Malley.

It was O’Malley who accidentally eye-poked Munhoz causing the fight to come to an end after the doctor deemed Munhoz unable to continue.

At the post fight press conference O’Malley accused Munhoz of just trying to get out of the fight that ‘Sugar’ was clearly dominating. 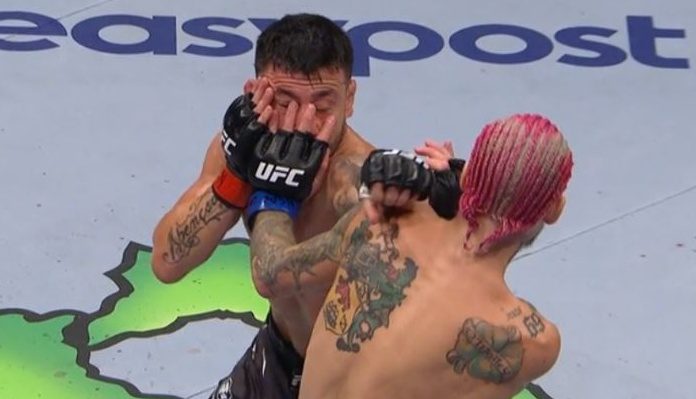 On a recent appearance of ‘The MMA Hour with Ariel Helwani’, Pedro Munhoz opened up about the fight and Sean O’Malley’s post fight video making fun of the incident:

“He didn’t do it on purpose. But a lot of his actions after the fight were things that I don’t think is right based on my values. He apologized to me, and then he made a video on TikTok and make fun of me. So you apologized to me for poking me because he realized… he came up to me like ‘I didn’t mean to poke you in the eye’ and I said, ‘I know you didn’t mean to poke me in the eye, we can run this back’. And then he said, ‘You’re a legend’…”

Continuing Munhoz indicated his disappointment of how O’Malley handled the situation:

“And then you go make fun, that’s the kind of things I tell my kids not to do it. You say one thing, then you go make fun on the other hand. I came into a generation just before his generation. It’s kind of like the reporter that went to interview Nate Diaz and asking stupid questions and got smacked right there on the spot… I’m not gonna make fun of someone to get more followers or something like that.”

Continuing Pedro Munhoz explained how he and his family have been threatened since he got in the cage with ‘Sugar’:

“All these guys texted me, talking about my wife, talking about my family, say they’re gonna fight me. And guess what? To them, I (said), ‘You can find me, I’ll be in the pool here Sunday all day’… a few of them walked by but they’re gangsters (on) computers. I was there the whole time, see a bunch of them, and nobody came to do anything.”

Now the question remains if we will see the UFC schedule an O’Malley vs Munhoz 2 where they can settle their grievances and perhaps actually finish a fight in the Octagon.

What do you think of Pedro Munhoz’s comments? Would you like the see the two bantamweights get back in the cage for a second time?