Paulo Costa vs Khamzat Chimaev is a potential fight that is drawing heat.

The pair were involved in an altercation at the UFC PI ahead of UFC 279 and some harsh words were exchanged. Paulo Costa recently returned to winning ways with a unanimous decision victory over former champion Luke Rockhold at UFC 278.

Khamzat is also coming off of a win having extended his undefeated record to 12-0 with a first round submission win against Kevin Holland. ‘Borz’ was originally supposed to fight Nate Diaz but a bad weight miss from the Swede lead to a last minute change of opponent.

Speaking on the MMA Hour, Paulo Costa described how a clash between him and ‘The Wolf’ needs happen.

He added, “You are stupid, you’re so crazy… I think I need to fight that guy. For sure [I’m the reason he missed weight]. Because he became so angry, so stressed, he gave up. He missed weight by eight pounds, almost nine, he gave up for sure.”

Chimaev has previously dismissed a fight with Paulo Costa. Speaking to reporters at the UFC 279 media day, the Chechen-born powerhouse said,

“Why (should I fight him)? I don’t fight with that guy. Already somebody f*cked him up in the ass.”

The Brave CF veteran has made no secret of his desire to go after multiple titles including the UFC middleweight strap. With Paulo Costa sitting at #6 in the division, it’s a fight that would actually make some sense for Chimaev to put him in title contention in two divisions.

The 28-year-old is certainly well placed to attack the belt at 170lb. He sits at #3 in the division. Dana White had previously suggested that a title shot against Kamaru Usman would make the most sense for Chimaev if both men won their respective fights. Of course, ‘The Nigerian Nightmare’ famously failed to hold up his end and relinquished the strap to Leon Edwards.

In terms of Chimaev’s options – it looks like a title contender clash with Colby Covington or a chance to settle the beef with Paulo Costa and make a likely foray into the top-5 at 185lb.

Who would you like to see Chimaev fight next? 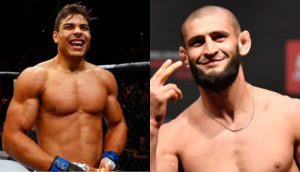