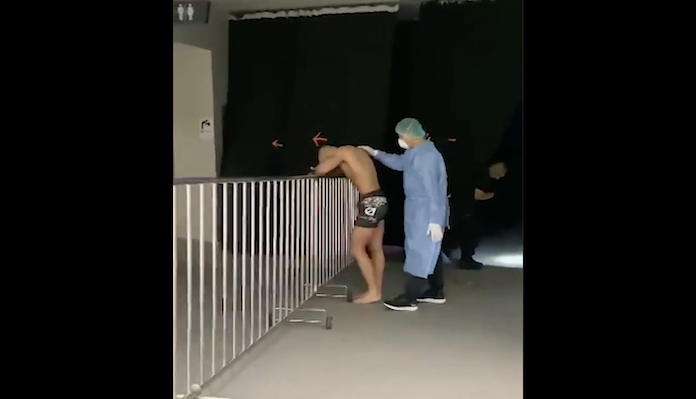 ONE Championship lightweight Eddie Alvarez got very emotional and shed tears after Iuri Lapicus left on a stretcher following ONE on TNT 1.

Alvarez took on Lapicus in the main card opener of the ONE on TNT 1 card on Wednesday night. The former UFC lightweight champion looked good early on as he was able to get Lapicus down to the mat and then tee off on punches. Unfortunately, some of the punches that Alvarez landed were deemed illegal shots to the back of the head by the referee, and “The Underground King” suffered a DQ loss. To make matters worse, Lapicus appeared to be seriously injured as he needed a stretcher to come into the cage and take him away.

Following the fight, Alvarez was extremely emotional. In a video shared by Ariel Helwani, Alvarez can be seen choked up and in tears after leaving the cage and heading backstage.

This is Eddie Alvarez after last night’s disappointing ending.

Very hard to see a legend like Alvarez like this. This is the toll of months of grueling physical/mental preparation. Fighters, man. Special people. Respect them. (h/t @ONEChampionship) pic.twitter.com/at20WEtOkj

Alvarez spoke with reporters at the post-fight press conference and he explained why he felt the way he did. The 37-year-old father of four and husband to loving wife Jamie said that he felt really bad for Lapicus because he knows that his opponent has a family, too.

“There’s not him and I. We’re in there together and we’re creating a show for the fans watching. But when the show is over, these fighters need to go back home to their families. And I got four kids at home and I got a wife,” Alvarez said. “I don’t know who Iuri has at home, but he has someone at home hoping he gets home safe. So it’s hard not to see him and think about myself. So that’s all that matters right now, that Iuri’s okay, and that he’s going to be okay, and that everybody can live to fight another day.”

What do you think is next for Eddie Alvarez following his DQ loss at ONE on TNT 1?