Former UFC lightweight champion Eddie Alvarez is on weight and on point for tonight’s matchup with Iuri Lapicus on the ONE on TNT 1 card.

Alvarez left the UFC in 2018 to sign a lucrative free-agent contract with ONE Championship. In his first fight with the promotion, he was upset by the underrated knockout artist Timofey Nastyukhin in a devastating fashion. The veteran, though, was able to rebound in his last outing when he defeated ONE stalwart Eduard Folayang to get into the position of fighting Lapicus for a potential title shot. Lapicus is coming off of a TKO loss to ONE lightweight champion Christian Lee — who fights Nastyukhin in the coming weeks for the title — and there are some fans who believe he might have the tools to give Alvarez problems. It’s a great fight and a tremendous co-main event for tonight’s ONE card.

ONE Championship differs from the UFC in that there are no ceremonial weigh-ins. Unlike the UFC and other North American promotions which are dominated by fighters cutting excessive weight the day before the fight, ONE banned weight cutting in 2017. Fighters are now routinely checked for both their weight and hydration during fight week, and they compete up a weight class. So in the case of Alvarez, he is fighting in the ONE lightweight division, but the weight limit for lightweight in ONE Championship is 170lbs. Without having to cut so much weight, the hope is that the athletes do less harm to their bodies and perform even better on fight night. Many of the athletes commended ONE for this process.

On Wednesday, Alvarez posted a photo of himself standing backstage on the ONE Championship scale. “The Underground King” appears to be in fantastic shape for this fight as he both weighed in successfully at 170lbs and passed the hydration tests, as well. 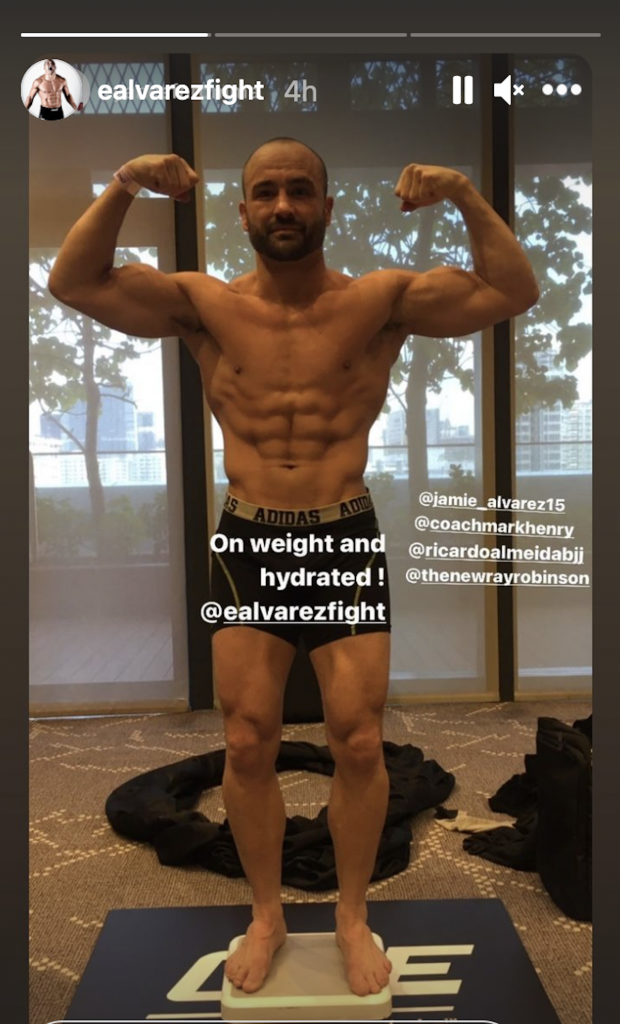 Do you think Eddie Alvarez will defeat Iuri Lapicus at ONE on TNT 1 tonight?