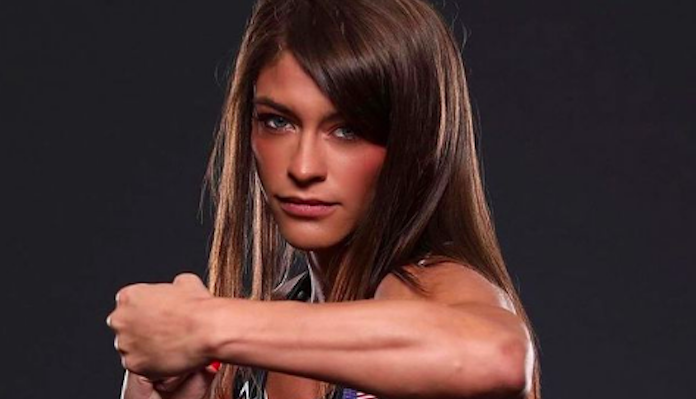 Alyse Anderson grew up watching the likes of Demetrious Johnson and Eddie Alvarez build legendary careers and establish themselves at the pinnacle of the sport.

Fast forward to now and the 26-year-old atomweight from Mason, Michigan feels ecstatic to be under the same umbrella with the aforementioned greats in ONE Championship.

“I respect them so much and I’m honored to be part of ONE,” said Anderson, who will have her promotional debut in the ONE Women’s Atomweight World Grand Prix at ONE: Empower against Japanese bet Itsuki “Strong Heart Fighter” Hirata.

Anderson, who signed with ONE early this year, isn’t a household name yet, but fans will get familiar with her soon.

Starting in 2013, she amassed a 6-0 amateur record that led to her signing with Total Warrior Combat.

From there, Anderson never looked back as she took down her foes one by one in her time with Invicta FC, scoring a second round technical submission win over Stephanie Alba in July 2018, before a split decision victory over Katie Saull a year later.

Now, ONE Championship is her realm.

But before she steps into the ONE Circle on May 28 for her quarterfinal match, Anderson will first be one with the public in seeing her idols fight on the ONE on TNT 1 card.

Johnson challenges Adriano Moraes for the ONE Flyweight World Championship in the main event, while Alvarez marks his return to the ONE Circle against Moldovan lightweight contender Iuri Lapicus.

Of course, it’s no surprise who Anderson is rooting for in those bouts.

“I’m excited to see them compete and it’s always good seeing other Americans fight in ONE. I’ll always support them,” said the Brazilian jiu jitsu blue belt, who is one of the new wave of American recruits who are venturing and testing their skills in ONE Championship.

The 14-year-veteran backed up his hype with stellar showings in his first three bouts in ONE Championship.

Johnson submitted Yuya Wakamatsu to a guillotine choke in the second round in his debut at ONE: A New Era in March 2019, before going on a rampage in the next stages, coming away with a unanimous decision victory over Tatsumitsu Wada in the semifinals at ONE: Dawn of Heroes in August, before capping it off with another unanimous decision win over Danny Kingad in the final at ONE: Century Part 1 in October.

Surely, he hasn’t lost a step even in ONE Championship.

But Mikinho is no pushover, with the reigning flyweight king a superstar in title fights, winning six of his last eight, with the latest being a unanimous decision win over Geje Eustaquio at ONE: Hero’s Ascent in January 2019.

Nevertheless, Anderson knows who he’s putting his money on.

“I always loved watching Demetrious Johnson. It’s been awesome watching him. That’s why I see Demetrious winning,” she said. “I would like to see him finish but I could see it going the distance.”

Anderson also feels the same way for Alvarez, who is marking his return to action after an injury sidelined him from competing in the final of the ONE Lightweight World Grand Prix.

The Underground King, despite already being 37, showed that he still has a lot left in the tank, tapping out former lightweight champion Eduard “Landslide” Folayang in the first round of their semifinal bout at ONE: Dawn of Heroes in August 2019.

Anderson is confident in giving Alvarez the favor in his match against Lapicus, who recently saw his 14-match win streak snapped in an unsuccessful title challenge against ONE Lightweight World Champion Christian Lee at ONE: Inside the Matrix last October.

“I want to say Eddie via finish,” she projected, banking on the all-around prowess of the veteran American. “I think he’ll finish, maybe on a later round.”

Lil’ Savage’s bold predictions even rubbed off to Sage “Super” Northcutt, who is making his ONE comeback after two years as he fights former ONE Lightweight World Champion Shinya “Tobikan Judan” Aoki at ONE on TNT IV on May 28.

For Anderson, Northcutt won’t have an easy time in his match, but she’s hoping for the best for the Sacramento native.

“It’s certainly a tough fight for Sage, but I just want to see him come back strong after his last fight. I know he’s putting in the work. Same with her sister [Colbey], I love watching their fights cause they came in the same background as I have,” she said. “I think that if Sage just sticks to his strengths and his gameplan, he’ll come out on top.”