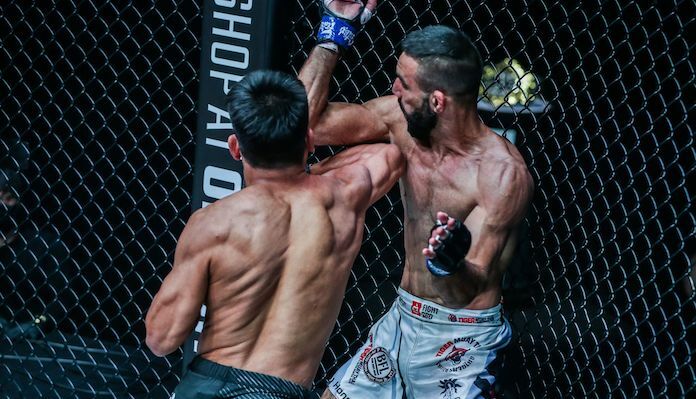 On Friday, ONE Championship returned to our screens with the compelling ONE: Fists of Fury 2 card out of the Singapore Indoor Arena.

The card was headlined by the ONE Championship debut of former RIZIN and ACB star Amir Aliakbari, who took on undefeated South Korean heavyweight Ji Won Kang. The co-headliner also occurred in the heavyweight debut, where Brazil’s Alexandre Machado took on Russia’s Anatoly Malykhin.

The expectation heading into these heavyweight matchups is that the winners would be well positioned in ONE’s rapidly improving heavyweight division, which is now home to stars like champ Brandon Vera, and contenders Arjan Bhullar, Mauro Cerilli, Marcus “Buchecha” Almeida, Oumar “Reug Reug” Kane and Dustin Joynson.

Other highlights of the card included a featherweight fight between Ryogo Takahashi and Tang Kai, and a bantamweight fight between fan favorites Mark Fairtex Abelardo and Emilio Urrutia. That latter fight ended with a 2021 Knockout of the Year contender.

See the full results and highlights of this exciting ONE Championship card below:

Heavyweight MMA
Kang Ji Won defeats Amir Aliakbari via KO at 1:54 of round one

Heavyweight MMA
Anatoly Malykhin defeats Alexandre Machado via TKO at 3:28 of round one

Featherweight MMA
Tang Kai defeats Ryogo Takahashi via knockout at 1:59 of round one

Tang Kai 🇨🇳 moves to 4-0 in ONE with a first-round KO of Ryogo Takahashi! #ONEFistsOfFury2 #WeAreONE #ONEChampionship pic.twitter.com/UsxpDtdxFH

Featherweight MMA
Yoshiki Nakahara defeats Ruslan Emilbek Uulu via TKO at 1:30 of round one

Let us know your favorite moment from this ONE Championship card in the comments section!