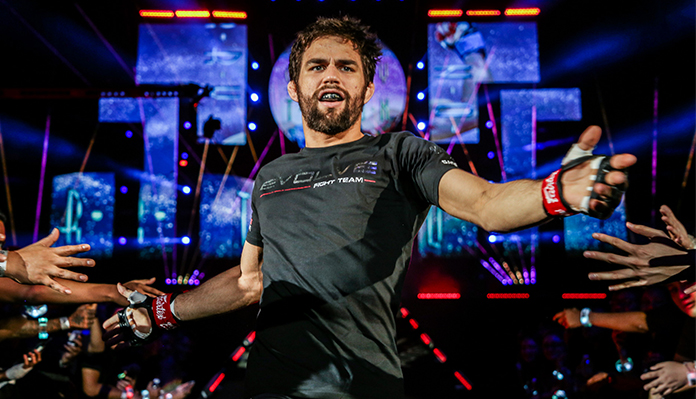 American grappling star turned mixed martial artist Garry Tonon will return to action this Friday night in what he considers his toughest bout so far.

The multiple-time Brazilian Jiu-Jitsu World Champion will look to climb the featherweight ranks with a victory over his next foe, in hopes of landing a shot at the belt in the very near future.

The No. 5-ranked ONE featherweight contender Tonon is scheduled to face #3-ranked contender Koyomi Matsushima of Japan in the co-main event at ONE: Big Bang, which broadcasts live from the Singapore Indoor Stadium in Singapore on December 4.

Tonon has done his due diligence and studied Matsushima’s particular style. He feels confident he can handle what the Japanese athlete brings to the table.

“I’ve paid close attention to what [Matsushima] does. He goes in and out a lot with kicks, and he kind of fights from a distance and explodes forward into takedowns. He also has a good reactive takedown. I’ll be mindful of all of those things,” said Tonon.

“I don’t want to say it’s a threat, but it’s a potential problem to be solved.”

Garry Tonon first got a taste of action in ONE Championship when he defeated Shinya Aoki in a grappling bout in 2017. Not long after, Tonon contemplated making the transition from submission grappling to mixed martial arts.

Eventually, Tonon debuted for ONE Championship as a mixed martial artist in 2018 with a technical knockout victory over Richard Corminal. He has since won five straight, getting better with every bout, and is quickly positioning himself as the next challenger to the featherweight throne.

According to Tonon, it’s due to all the hard work he’s put in over the years.

“I wouldn’t say there’s one specific skill that I’ve been working on, but I’ve just been trying to get better at mixed martial arts,” Tonon said. “I have a long road ahead of me. I definitely think that by winning, it puts me in a really good spot where I have the leverage to say, ‘Hey, I get the next crack at that thing.”

ONE: Big Bang is the first of ONE Championship’s live event offerings in the month of December. The main event features a showdown between ONE Light Heavyweight Kickboxing World Champion Roman Kryklia of the Ukraine and challenger Murat “The Butcher” Aygun of the Netherlands.

The 29-year-old Tonon is the picture of confidence headed into his biggest test so far. And while he believes that his skills are enough to defeat Matsushima, Tonon says he’s still wary that the tables could be turned on him, and that he needs to be careful in his approach. That being said, Tonon also fully expects to be declared the winner.

“I’m no longer feeling things out when I’m fighting anymore, or testing the waters with striking. When I go out to fight, I go out to win and crush my opponents as quickly as possible. So, I think this will be another situation where I am very dominant very early,” said Tonon.

“I know there’s a lot of people out there that would love to tune in and watch Garry Tonon get knocked out, so this might be your chance to see that. You never know. I see this fight ending earlier rather than later. I predict a first-round submission or TKO.”