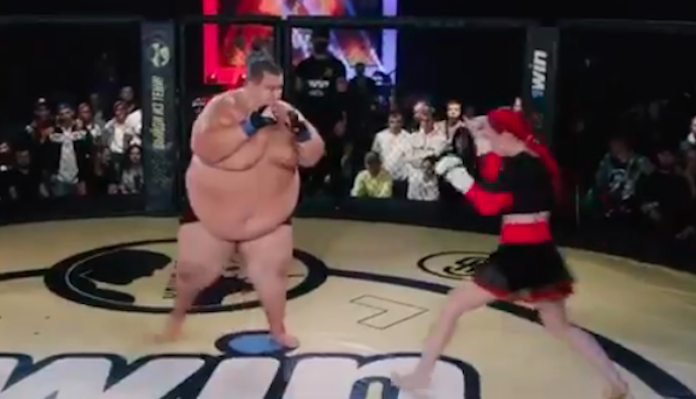 Veteran MMA referee Marc Goddard was not impressed by a recent fight involving a 529-pound man and a 139-pound woman.

The bout in question occured in Moscow, Russia last week, under the Nashe Delo Fights banner. In the early going, it looked like the male fighter, Grigory Chistyakov, might come out on top. In the end, however, Darina Madzyuk turned the tables on her male foe, winning with a volley of strikes.

While Goddard regularly officiates events all over the world, he was not on duty for this card in Moscow. From the looks of it, that’s for the best, as the highlights of this inter-gender bout clearly didn’t sit well with him.

This is what we are dealing with – in 2020. This is what we are fighting against as the parallels & negative connotations are continually drawn. To outsiders & detractors this is MMA. Shameful. Sickening. Abysmal. 😔 https://t.co/lWDyXy7R0z

“This is what we are dealing with — in 2020,” Goddard wrote on Twitter this week. “This is what we are fighting against as the parallels and negative connotations are continually drawn. To outsiders and detractors this is MMA. Shameful. Sickening. Abysmal.”

Marc Goddard was not the only member of the MMA community to chime in on this bizarre contest in Moscow. It also caught the attention of former ONE and Bellator welterweight champion Ben Askren, who seemed less repulsed and more confused.

WTF is even going on in Russia https://t.co/JXQ1B71m0u

“WTF is even going on in Russia,” Askren wrote.

While Goddard and Askren are clearly not entirely comfortable with spectacles of this kind, they may have to get used to it. Oddities of this nature have always existed in MMA, and with the arrival of new shows like Thailand’s Fight Circus, which promotes this kind of fight exclusively, it’s unlikely that’s going to change.