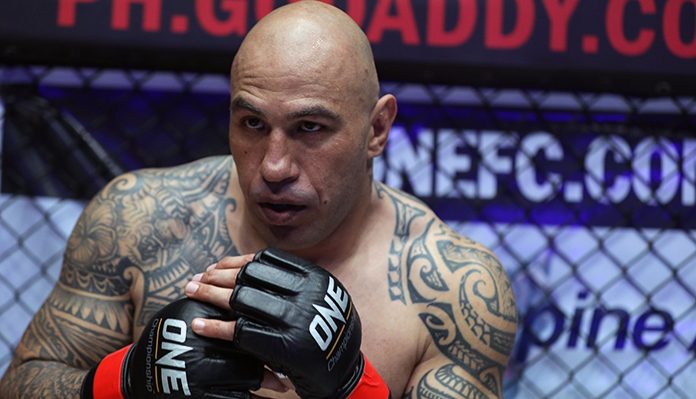 ONE Championship heavyweight champion Brandon Vera is set to defend his belt when he takes on former UFC standout Arjan Bhullar later this spring.

Vera will meet Bhullar at ONE Championship: Code of Honor which takes place on May 29 at The Mall of Asia Arena in Manila, Philippines. Asian MMA was the first website to report the news of Vera vs. Bhullar. When they clash, it should be one of the best heavyweights fights in 2020 that doesn’t take place in the UFC or in Bellator.

Vera (16-8, 1 NC) is coming off of an epic light heavyweight title fight loss to Aung La Nsang at ONE Championship: Century Part 2 last October. It was a slugfest between two heavy hitters, but ultimately La Nsang was the fighter who was able to escape with his hand raised. The loss snapped Vera’s four-fight winning streak.

Vera originally won the inaugural ONE Championship heavyweight belt in 2015 and defended the title twice. Vera is also a former WEC Heavyweight Grand Prix champion and was a long-time standout in the UFC.

Bhullar (10-1) is coming off of a win over Mauro Cerilli in his ONE debut at ONE Championship: Century Part 2 last October Prior to that, Bhullar had a 3-1 run inside the Octagon with wins over Juan Adams, Marcelo Golm and Luis Henrique and a submission loss via omoplata to Adam Wieczorek. After the win over Adams, Bhullar became a free agent and signed a lucrative contract with ONE.

Vera vs. Bhullar should be a fantastic heavyweight fight between two of the better heavyweights not fighting for a North American promotion. Vera should have a striking advantage in this fight but Bhullar will have the edge in the wrestling which makes this a very intriguing matchup.

Who do you think wins the ONE Championship heavyweight title, Brandon Vera or Arjan Bhullar?