Former UFC women’s flyweight champion Nicco Montano has been hospitalized after being attacked.

Montano (4-3 MMA), was released by the UFC back in August after she missed weight for her scheduled fight with Wu Yanan on July 31.

The 32 year old Montano, had recently revealed her plans of making a return to combat sports in the featherweight division (145 lbs) in 2022.

However, due to trauma and injuries suffered in her recent attack, Nicco Montano’s planned comeback could be pushed back.

According to a story posted on the former flyweight champs Instagram just a few short hours ago, she was recently attacked and is currently at the hospital: 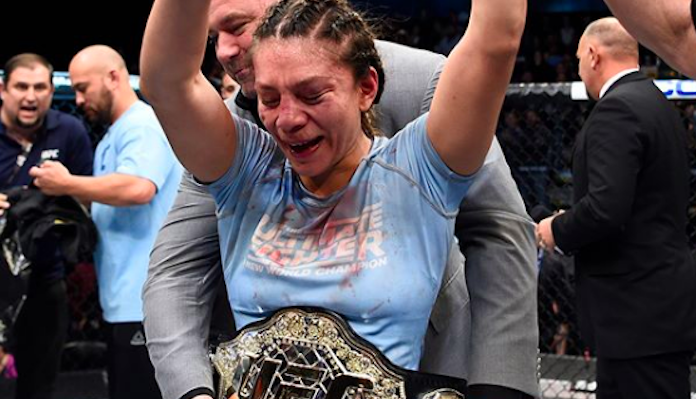 Her first title defense was scheduled to take place against future champion Valentina Shevchenko, however, Montano was hospitalized while cutting weight and was ultimately stripped of the strap.

If she does make a return to combat sports in 2022, Nicco Montano plans to begin her comeback competing at featherweight.

“I think for now, at 145, I can throw out four fights a year and eventually come back down to 135. But healthily, right? I was talking to Miesha Tate. She said she’s walking around at 142 right now, she hasn’t been healthier in her life. There’s just little tricks and stuff that you’re able to do with your body but you have to be able to cross everything out so that there’s no other noise and you can focus on your priorities and that’s kind of where I’m at right now. So for now, 145, maybe this year sign a four fight contract somewhere”, Nicco said.

This article appeared first on BJPENN.COM
Previous articleNew Thrill and The Agony video shows what Colby Covington said to Kamaru Usman after UFC 268
Next articleKevin Lee reacts after being let go by the UFC: “Honestly, that’s what pisses me off the most – the lack of respect”
© Newspaper WordPress Theme by TagDiv