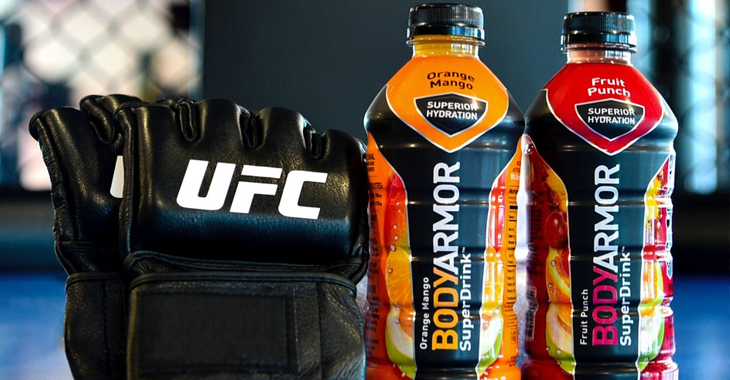 After already becoming the official drink of Conor McGregor’s giant boxing match with Floyd Mayweather, it nails its biggest marketing deal in company history. The UFC has officially entered into a multi-year partnership with Kobe Bryant’s sports drink company, BODYARMOR. The partnership will begin in 2018 and it feature the company becoming heavily involved in the events and the UFC brand, not just taking a seat in the background.

UFC announced this morning that @kobebryant‘s @DrinkBODYARMOR will be the official sports drink of the UFC in the United States beginning in 2018. Multi-year partnership. #likekobeifIcouldbelikekobe

“BODYARMOR is an industry leader in sports hydration and they are a perfect fit to partner with UFC. Providing UFC athletes with safe, nutritional products while training at the UFC Performance Institute is an important part of helping them maximize their overall performance and BODYARMOR will help us do that.” — Dana White via official press release.

Not only will BODYARMOR have two “Hydration Stations” in the UFC’s  #12-million Performance Institute, the new partner will serve as the presenting sponsor for UFC weigh-in events, as well as branded on stools, towels and buckets inside Octagon during all United States events. BODYARMOR will also have a presence on the UFC’s official website as well as live-event programming. High profile athletes on Team BODYARMOR include NFL’s Richard Sherman and NBA’s James Harden. This opens up for an opportunity for UFC fighters to enter into the fold.

“UFC is to boxing what BODYARMOR is to Gatorade. People are looking for newer and better.” — BODYARMOR co-founder Mike Repole, also co-founder of Vitaminwater and Smartwater.