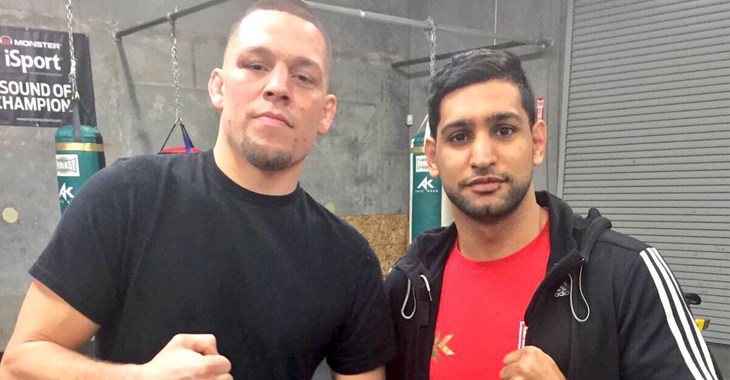 Nate Diaz may still be laughing at Dana White’s latest fight offer but that isn’t stopping the Stockton native from getting his training rounds in. Diaz said in his caption, “Here with @amirkingkhan at @andresogward and #virgilhuntergym in the bay #norcal #100.”

Khan also tweeted the same photo with Diaz and captioned his post, “Great to have former UFC champ @NateDiaz209 train at our boxing club in SF. Keep up the good work 👊🏽”

Great to have former UFC champ @NateDiaz209 train at our boxing club in SF. Keep up the good work 👊🏽 pic.twitter.com/7Wjl4aVIke

Although Kahn was mistaken with Nate being a former champion, it shows that the younger Diaz brother is still making it a point to train with the top talents in all the aspects of martial arts.

With recently applying for a boxing license feeling like he is being put “on the shelf” by the UFC, Diaz has got some great training talent around him. If Diaz does happen to make it into the boxing ring, he should be more than prepared. “Now [McGregor] is talking about this Mayweather stuff and it’s getting all this hype, and I’m like ‘Do your thing with Mayweather.’ But if they let him out to box, then I’m boxing somebody too – somebody mainstream on the same card. Or another card – whatever,” Diaz told ES News.

“But I’m not doing it for a publicity stunt, I’m doing it because I love the sport of boxing. I want to win, I want to win fights for real and get out of this MMA shit that I’m not even into anyway. I don’t think they want me in there anyway, so I might as well stay out.”

What are your thoughts on Nate Diaz taking his talents into the boxing ring? Sound off in the comment section!