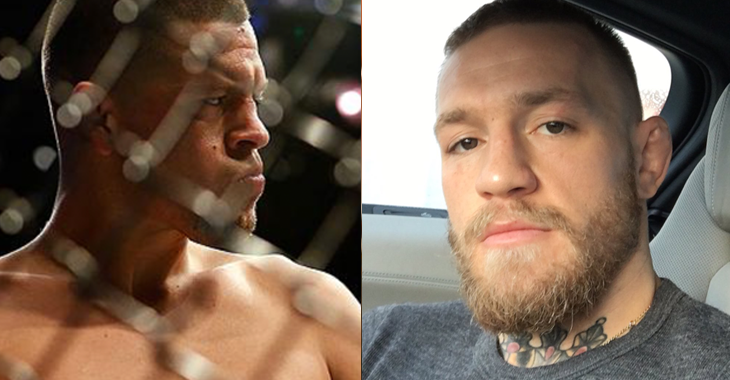 Ever since the highly successful UFC 202 event took place, Nate Diaz has said that he would be waiting for the trilogy fight with Conor McGregor unless another fight made as much financial sense.

Now with Conor McGregor being the UFC undisputed lightweight champion after beating Eddie Alvarez at UFC 205 in November, “The Notorious” said he is taking a break from fighting to have his first child.

UFC President Dana White has previously stated that McGregor would not be fighting before May of next year, which is when his baby is due. However, White mentioned recently that “The Notorious” will be taking 10 months off from fighting, which would mean no Conor McGregor show at least until September 2017.

Interestingly, McGregor’s rival Nate Diaz seems to be on the same schedule.

The scrapper from Stockton, California tweeted on Wednesday, “Imma take 10 months off.. 💯💯💯.”

Conor McGregor and Nate Diaz have fought twice with each star holding a win over each other. Diaz shocked McGregor in their first meeting at UFC 196 where he was able to weather an early offense from the “The Notorious” and gained momentum in the second round. After landing some clean strikes on the Irish superstar, McGregor shot in for a takedown which Diaz used to take the fight to the ground and devastated McGregor with some ground and pound and finished the fight with a rear-naked choke.

In their second meeting at UFC 202, the two traded shots with one another for all five rounds in an epic fight where both athletes saw success in the Octagon. Ultimately, it was Conor McGregor who had his hand raised as he was awarded a majority decision with one judge seeing the fight as a draw.

Will we ever see Conor McGregor vs. Nate Diaz 3? If McGregor takes on an opponent that isn’t Nate Diaz, do you think we will see the product of Stockton sign for any other fight than the trilogy bout against McGregor? Give us your thoughts on the potential matchups for the both Conor McGregor and Nate Diaz in the comment section!