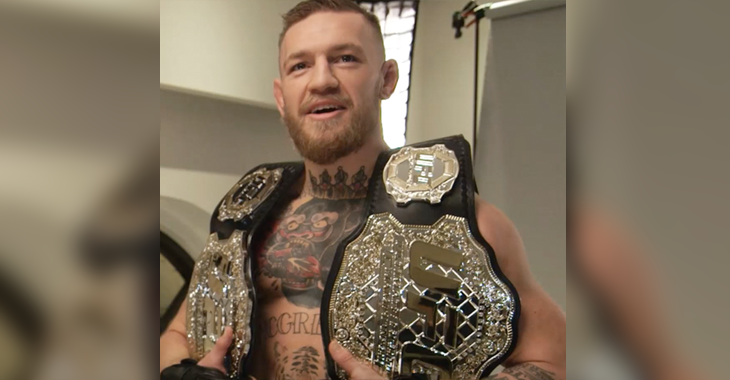 “Mystic Mac”, who became the first fighter in UFC history to hold two belts simultaneously after knocking out Eddie Alvarez last night in New York, revealed that he will be soon be a father at last night’s press conference.

The current UFC lightweight and featherweight champion also stated that he deserves to be a part owner of the UFC going forward. His words.

“They’ve got to come talk to me now because no one’s came and talked to me since the sale has happened as a businessman,” McGregor told the media following UFC 205. “I’ve been approached as, ‘Hello’ and that type of stuff, but I’ve earned something. Who owns the company now? People have shares. Celebrities. Conan O’Brien owns the UFC now. Where’s my share? Where’s my equity? If I’m the one that’s bringing this, they’ve got to come talk to me now. I’ve got both belts, family on the way. If you want me to stick around, if you want me to keep doing (this), let’s talk. But I want the ownership now. I want the equal share. I want what I deserve, what I’ve earned.”

“I feel I’ve outworn the previous contract,” McGregor said. “Now it’s time for the real. I know I’m the highest paid already, but when I’m looking at what they’re taking in, that list that Lorenzo (Fertitta) compiled to show the new owners, that’s like the gospel right there. That’s proof of what I bring. You want me to come around, stick around and service that debt and continue to push, bring me on board for real. Not just as this. I need to be set for life for this. If you want me to be truly in on this then I need to be all-in on this, proper. That’s a stake in the company.”

UFC officials did not comment on whether or not they would grant the Irish superstar his wish. However, “Mystic Mac” stated that he is ready to take some time off until his desires are fulfilled.

“Twenty-eight is young, so we’ll see,” McGregor said. “Fresh, I am. Not a bother on me. I could go again. I honestly could go again no problem. I’m just going to go chill for a bit, enjoy these two belts and that’s it.

Do you think the new UFC owners will give Conor McGregor a stake in the company? Sound off PENN Nation!

McGregor has been teasing a “major announcement” for weeks in the lead up to tonight’s historic event.