While undefeated welterweight prospect Mike Perry is just 2-0 inside the UFC, ‘Platinum’ has made quite the name for himself in his brief time with the promotion.

The Flint, Michigan native has not only won all of his UFC fights, but all of his professional fights, by way of KO/TKO. In his UFC debut earlier this year, Perry picked up an impressive first round TKO win over Hyun Gyu Lim, drawing the attention of fight fans. In his second fight in the UFC, Perry picked up a third round KO win over Danny Roberts at UFC 204, drawing him even more attention from fight fans. 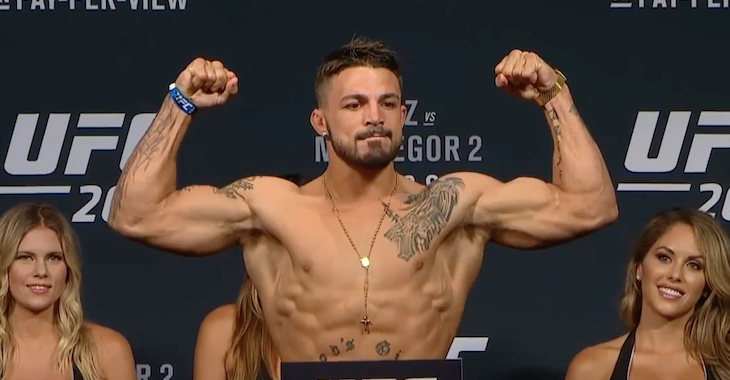 With the biggest fight of his career coming up against Alan Jouban this Saturday at ‘UFC Fight Night: Sacramento’, Perry appeared on BJPenn.com’s Rapid Fire to give his prediction for the fight, as well as to unveil his plan to climb to the top of the UFC’s welterweight division:

“After I knockout Alan Jouban in the first-round of our fight this Saturday in Sacramento, I want someone in the top 15 next!”

“I will take the highest rank fight they want to give me. I am ready to work my way up the ladder and become the UFC welterweight champion of the world. Until I get to do that, I will just continue to demolish everybody in my path. “

Taylor asked Perry if there was anyone in particular he wanted to fight next (after Jouban) and then suggested that fights with Matt Brown, Robbie Lawler, Donald Cerrone and Tyron Woodley would all be awesome to see in the future.

“I will fight any one of those old guys man. They are all old and breaking down. It is time for some new blood to take over the 170-pound division and I am going to be the one to get that started. I’ve had those names stuck in my head for a while now. After I KO Jouban, I am going to call out some names and tell the UFC to serve them to me on a Platinum platter. So those fights are definitely going to go down. I’m going to get one of those names soon and put them away quick.”