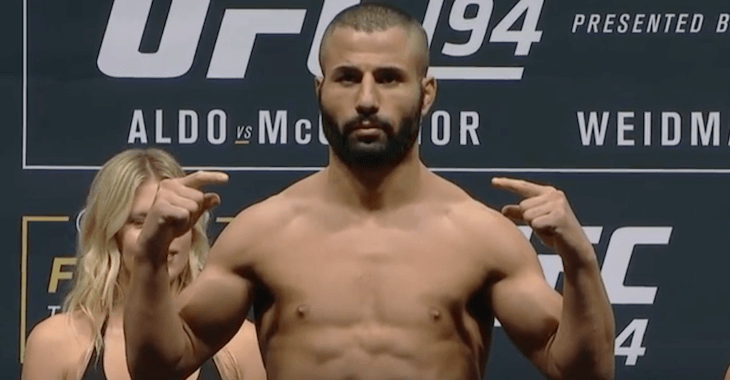 It’s hard to keep track of all the fights we miss out on nowadays. It seems to happen more than ever before. Back at UFC 214, Sage Northcutt was originally supposed to fight Claudio Puelles, but he had to be replaced by John Makdessi due to an injury. Of course, when it rains it pours. Northcutt and Makdessi never made it to the Octagon either because both men got injured as well. This was no fault of Makdessi’s own though, in a recent interview he revealed it was none other than Mickey Gall who injured his shoulder as a result of a suplex while ‘sparring light’.

“Mickey Gall is a f-cking punk. He’s a deceiving, fake ass b-tch. I heard a crunch and the pain was immediate. I really didn’t want to cause a commotion but I looked in his eyes and thought ‘Are you a f-cking idiot?’ I don’t feel like [TriStar]’s my home. I never felt like it was my home. I was never really happy there, but I do appreciate what they did for me. I’m not saying it’s a bad gym. It’s just about what works for me and doesn’t work for me. I’m not disrespecting anybody, I want that to be very clear. I’m not bitter. In the end, I disrespected myself by letting other people dictate my way. When I met Duke we talked a long time. I was emotionally drained. I think he understands where I am coming from.” — John Makdessi speaking to FanSided’s Amy Kaplan.

According to the report, TriStar gym ignored the incident caused by the visiting welterweight fighter and John Makdessi never felt like he was supported by them through his ordeal. Either way, the fight game and Makdessi moves onward. He’ll be fighting Abel Trujillo at UFC Winnipeg on December 16th that is seriously coming together as an impressive card. Robbie Lawler will be taking on Rafael dos Anjos in the main event, while Ricardo Lamas will rematch Jose Aldo as the co-main. Let’s just hope everyone stays healthy.