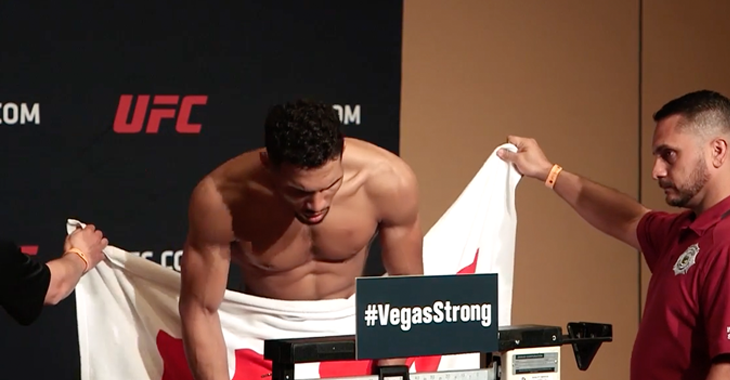 Tony Ferguson and Kevin Lee put on a great fight at UFC 216 but it almost never happened. Media watched the early weigh-ins on that Friday morning on the edge of our seat. Watching Lee come out and stand on the scale at the very last second was stressful, both in the danger of the fight falling through and for the fighter’s health itself. Luckily, nothing happened, Lee made weight on the second attempt and we’ll forget out it. But that’s the problem, sometimes it doesn’t happen like that. The commission approved new weight classes, but even if the UFC implements them, Frankie Edgar thinks it won’t do any good.

“Wrestling has seen it happen back in ‘96, ‘97, or something like that, where a few wrestlers died at the college level and they upped the weight classes. If you add more weight classes, it could encourage people to cut less weight, but it also might encourage someone to cut more weight. They’ll say, ‘Oh, I couldn’t make ‘55, but I can make ‘65,’ and they were going ‘70. So, I don’t know, I think people are always going to look for a way to get an advantage and cutting weight is going to be really tough to get people to stop doing that. Maybe hydration tests. In college, the best way we did it, we did hour weigh-ins, you weigh in an hour before you compete. But that’s just not feasible, I think, in MMA.”

“It’s just tough. I don’t think there’s any easy answer. Some suggestions have to happen or something bad will happen. You’re seeing guys end up in hospitals for weight cuts pretty frequently, luckily they’re getting the help they need and nothing too serious happens. […] Some guys need to diet to make weight, some guys do belong at lower weight classes. But there are some guys that cut way too much. It’s almost, to me, that’s not the tough guy’s mentality, cut a bunch of weight to be the bigger guy. I’d rather be the little guy fighting the bigger guy. I do this sport to be the toughest. Not to have the most advantages and win. I did it to prove that I’m the best at fighting itself, not at everything else.” — Frankie Edgar on The MMA Hour.

Kevin Lee’s coach agreed that changes need to be made, but just like Franke Edgar, who knows what those changes are. It definitely isn’t easy to find the solution. It’s also ingrained in combat sports culture, especially in wrestling where a lot of fighters have came from. As for now, the responsibility will have to settle on the shoulders of fighters and their coaches themselves with the promotions not putting in protocols. Even with Edgar’s philosophy of the ‘little guy fighting the bigger guy’, Edgar admits he cuts from 160lbs to get to 145 at featherweight. A lot of fighters cut even more than that.