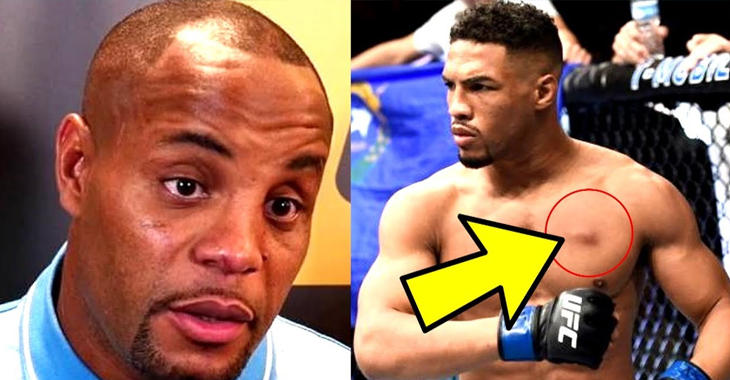 Before the main event of UFC 216, as Kevin Lee walked to the Octagon, Joe Rogan immediately blurted out that Lee may have a staph infection. There were mixed reactions to Rogan identifying the medical condition based off of a glance, but people forget Joe Rogan is a lifelong martial artist and the owner of two BJJ black belts in addition to working with the UFC since 1997. Turns out, he was right as Kevin Lee admitted it was indeed staph in his post-fight interview. Daniel Cormier recently talked about the incident on his podcast and revealed the UFC didn’t want the broadcast team to talk about it.

“So, we’re on air, right, and [Joe] Rogan goes, ‘Is that staph?’ And somebody in my ear, I don’t know who it is goes, ‘Don’t say nothing.’ And I was like ‘What the hell? Do I address this, or do I not say anything?’ So, I was like ‘it is.’ I couldn’t help myself, I go ‘it is staph.’ Because it’s big and red, and raised up. From the moment he took his shirt off and we saw that I go, ‘This dude’s in a lot of trouble’. That sh-t’s advanced. The issue is, you can take antibiotics to get better. But again, antibiotics, it’s the devil when you’re getting ready for a fight because it f-cks with your cardio.”

Great look for Nevada. Kevin Lee admits he has staph infection. Fought Tony Ferguson with it. Tried to cut weight with it. Good lord.

“You don’t really have much of an option in terms of feeling better when you have staph. For you to get better, you have to take antibiotics and it affects everything. It affects you weight cut, it affects the fight, it affects the training, it affects everything. In training, you go ‘oh my goodness, what is this? It might be staph.’ You stop, you get on antibiotics, and you get better. When you’re a week from the biggest fight of your career, you go ‘oh shit, this is staph, but I gotta’ keep training.’ You don’t have the option to just shut it down and everything affects it. You get stressed? Worse. You train to hard? Worse. You start to cut weight? It gets worse.” — Daniel Cormier on his Talk and Talker podcast.

Daniel Cormier — and even Kevin Lee — takes nothing away from Tony Ferguson’s performance that night. Either way, props to Lee for pushing himself through a brutal weight cut and carrying on with the fight anyway. With the way Khabib Nurmagomedov’s issues have haunted the UFC, Lee definitely didn’t want a pull-out to loom over him. The whole staph infection issue though, that’s another thing entirely. Something tells us, this isn’t the last time we’ll hear about it.