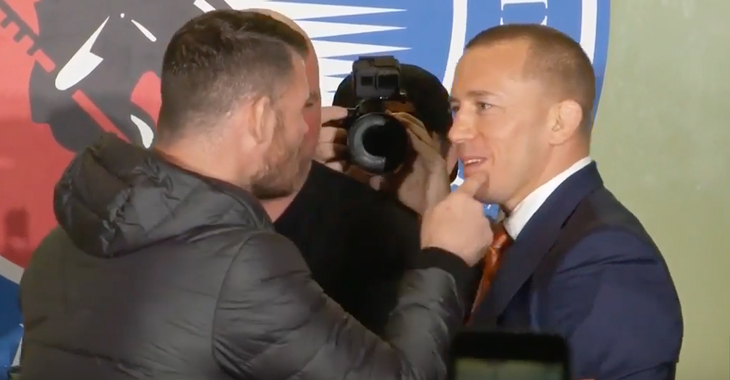 We’re edging closer and closer to the return of Georges St-Pierre at UFC 217, who’ll be challenging Michael Bisping for the middleweight title. The stakes are gigantic. If St-Pierre loses, Bisping gets a huge notch in his legacy and GSP has said he’ll retire. If St-Pierre wins though, he’ll be cemented once again as one of if not the greatest of all time and he goes on to defend against Robert Whittaker. …Or will he? Michael Bisping thinks there is a much greater master plan by the UFC brass that he is set to spoil.

“[Georges St-Pierre] keeps talking about, ‘It’s in the contract. It’s in the contract that I fight [Robert] Whittaker,’ but he ain’t. He ain’t gonna’ fight Whittaker if it’s in the contract or not. I believe it is in the contract but all he’s gotta do is say, ‘I don’t fancy doing that and if you want me to fight again and maybe sell a lot of pay-per-views, it’s gotta be someone else.’ The UFC would fold, I’ve got to imagine. He wants to beat me, go back down to welterweight, beat Tyron [Woodley], and then face Conor [McGregor], beat all three, and then retire and make a ton of money. And the UFC probably wants that to happen. By that I don’t mean beat Conor, I mean beat me. Beat me, then either beat Woodley or go straight to Conor.”

‘Do you want me to talk, or do you want to get the f*ck out?’ Michael @Bisping, making friends in Canada. More: https://t.co/u07pZ42i74 pic.twitter.com/Qzw0JmHpxr

“He doesn’t need to fight regularly. [St-Pierre can] fight sometime towards the end of next year and in the meantime, Conor can fight [Nate] Diaz or [Tony] Ferguson, whichever one it’s gonna be, and then he can take some time off, and in the meantime, St-Pierre can be losing the weight to meet at a catchweight. The skeptic inside me says [the UFC] probably want that to happen. If I was running the UFC, that’s what I’d want to happen. My job is to play spoiler, wreck all those plans, and beat the sh-t out of Georges St-Pierre.” — Michael Bisping on his Believe You Me podcast.

Michael Bisping must have perfected the ratio of mix and sugar, because this Kool-Aid is completely drinkable. If Georges St-Pierre is truthful about his intentions of this being a relatively short return, then it would make complete sense for him to try and get the biggest fights possible. That means a fight with Conor McGregor is inevitable, while a scrap with Tyron Woodley would be understandable so St-Pierre could maintain his welterweight crown. Regardless of all of this, he has to get past Bisping on November 4th first.