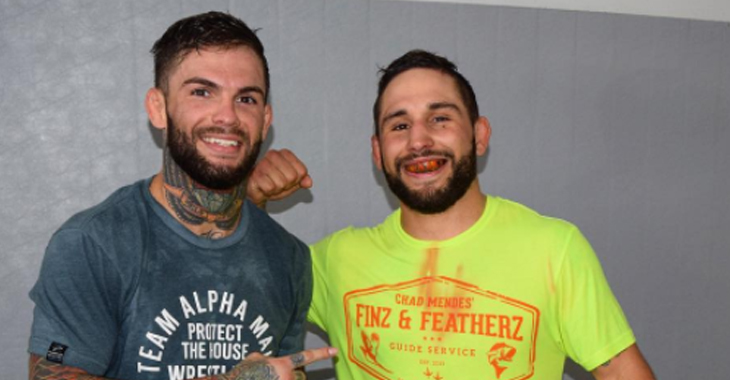 It’s been a long time since we’ve seen Chad Mendes in the UFC. After suffering two back-to-back losses to Conor McGregor and Frankie Edgar, he popped for GHRP-6 and was suspended for two years. GHRP-6 sounds like some sort of robot from Star Wars, but it’s actually a growth hormone peptide that ended up being inside a cream that Mendes used to treat his chronic plaque psoriasis. With all of that said and done and with his body healed from non-stop competition, Chad Mendes is getting close to returning to the UFC.

“We’ll be back in the Octagon either the end of May or beginning of June is what we’re shooting for. A little over two years is what it will be [since I’ve fought for the UFC]. In 24 years, I’ve never taken a year off. From five-years old, there was never an off time. I think both mentally and physically it’s been so great for me. Just being able to step away from it and let my body heal. I had bumps and bruises, broken the tops of my foot, there was just so many things that never gotten the time to heal. […] I think just having the time off, being able to mentally step away form it, let everything recharge — like, I have that drive again. This is the type of sport you can’t half ass. You’re going to get hurt if you do.” — Chad Mendes speaking to Jason Hariston. Featherweight is still one of the most exciting divisions in the UFC and adding Chad Mendes back into the mix will add even more fuel to the fire. He boasts an impressive 17-4 record, with all of his losses only coming from former UFC champions, two of them inflicted by Jose Aldo. Come Summer of next year, you have to think a couple of wins for Mendes could mean another title shot. Can you imagine Max Holloway defending against “Money” Mendes? Enough said.