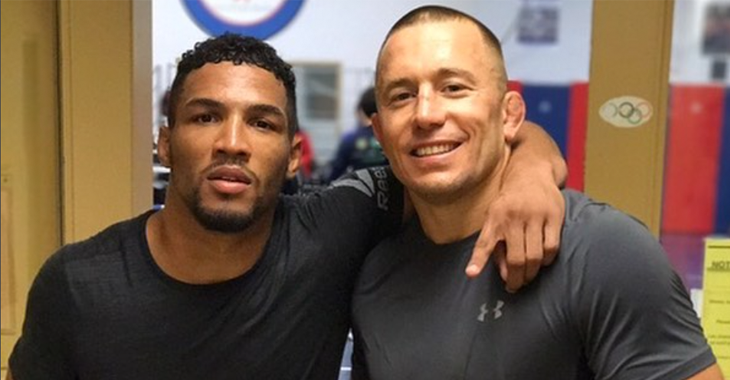 Both Kevin Lee and Georges St-Pierre have big fights coming up in the UFC. Lee will be fighting for the UFC interim lightweight title against Tony Ferguson in the main event of UFC 216 in October. St-Pierre will be making his return to the Octagon after stepping away from competition nearly four years ago and will jump up a weight class to take on Michael Bisping for the UFC middleweight title at UFC 217 in November. With their title fights approaching, Lee and St-Pierre got a training session in together in Montreal as the “Motown Phenom” first posted a photo of the two together. Lee said in the caption of his post, “2 hours of wrestling. 2 legends. 2 months. 2 gold straps. All of a sudden you the one they look up 2. #25tolife.” St-Pierre also posted their photo and said, “Great to see Kevin Lee (@motownphenom) at the Montreal Wrestling Club for a quick training last night – Wishing him the best for his upcoming 155 lbs interim title fight at UFC 216! 👊🔥👊”

Kevin Lee holds a 16-2 professional MMA record and is 9-2 in the UFC. The “Motown Phenom” is currently ranked #7 in the lightweight division by the UFC and is riding a five-fight winning streak. Lee last fought Michael Chiesa and scored a controversial win with referee Mario Yamasaki calling an end to the fight before Chiesa tapped while in the tight grip of Lee’s rear-naked choke.

Georges St-Pierre last fought in November 2013 where he won a close split decision over Johny Hendricks. St-Pierre stepped away from competition after that fight and had a rocky relationship with the UFC and the UFC President Dana White. St-Pierre were able to mend their relationship and in February, the former UFC welterweight champion signed a new contract with the UFC and is set for his return at UFC 217.