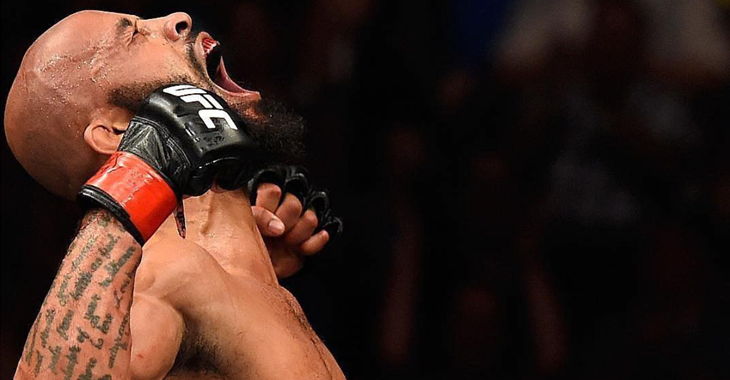 Another UFC main event has been canceled just days away from the scheduled date. This time it was for the UFC 215 flyweight title fight featuring Demetrious Johnson and Ray Borg. Borg, the challenger was forced to withdraw from the title fight due to being ill and was deemed unfit to compete by medical doctors.

Members of the MMA community reacted to the disappointing news as the UFC released a statement on Borg’s illness and the process of UFC 215 ticket refunds.

Former UFC bantamweight champion TJ Dillashaw, who was originally being lined up to fight Johnson for this fight reacted on Twitter. Johnson, who has the chance to set the UFC record for most successful consecutive title defenses in his next UFC flyweight title fight would not accept the fight with Dillashaw, who has never competed professionally at flyweight. “Mighty Mouse” did not like the principle of Dillashaw skipping the line of flyweight contenders, which is how the matchup with Borg was arranged.

get rid of the fucking weight cut @ufc !Guys are getting sick and ruining business.Add weight classes. Why are we waiting for someone to die

Card in canada are cursed :/

Well sumbitch… guess there will be no records broken this weekend! https://t.co/4dxLnVntkX

Terrible news. I clearly am on a very similar boat with late cancellation, but main event…yikes poor Canada https://t.co/KL9t9AtAP7

Borg is weak in my mind, you're the challenger and prolly will get skipped over

You refused to fight TJ. Instead went with a guy who had missed weight 2 of his last 4 fights. There ya go. #UFC

Fuck!
I was looking forward to that ☹️ https://t.co/qtWm7vQ0FH