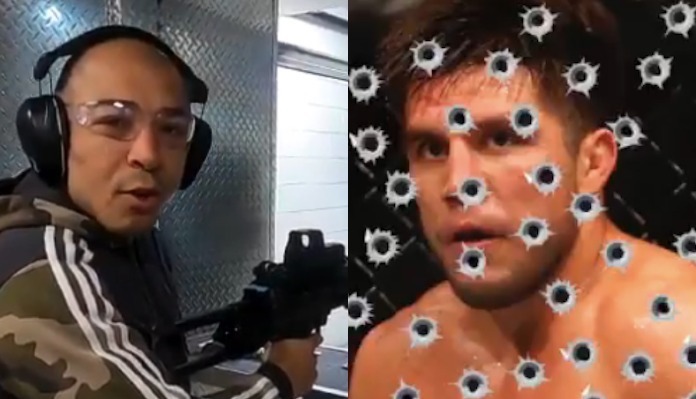 Jose Aldo came up short in his UFC 245 bantamweight debut, losing a decision to Marlon Moraes. That being said, many members of the MMA community felt Aldo deserved the judges’ nod in this fight — UFC bantamweight champ Henry Cejudo is among them.

Shortly after UFC 245, Cejudo issued a callout of Aldo, challenging the former featherweight champion to a fight in Rio de Janeiro, Brazil.

It did not take long for Aldo to respond to this callout, and he did not hold back. He gave his response to Cejudo in a video posted to Twitter.

I am the King of Rio and you are Snow White’s Security Guard! Sign the Contract and let’s get it right. @HenryCejudo @danawhite pic.twitter.com/mU1tTXtrwn

“I am the King of Rio and you are Snow White’s Security Guard! Sign the Contract and let’s get it right,” Aldo wrote in the caption for his post.

Aldo also responded to Cejudo in an interview with MMA Fighting. He says he’s happy to challenge the bantamweight champion — particularly in Brazil as Cejudo suggested — and will be ready to begin another cut down to bantamweight whenever he’s required to do so.

“I will beat everyone,” he said. “I will become the bantamweight champion.”

“If it’s in March or May, it doesn’t matter to me,” Aldo said. “I just want him to sign the contract so we can fight. I’ll start my diet and do whatever it takes.”

In the same interview, Aldo protested his loss to Moraes, which is seemingly the only thing barring a possible fight between him and Cejudo.

“The guy (Moraes) didn’t want to fight. Fans were booing and I was putting pressure the entire time,” he said. “I don’t know how they came up with that result. I’m the most honest guy in the world. If I think I lost, like the (Alexander) Volkanovski fight, I’ll say I lost. But I don’t think I lost this fight.”

Does a fight between Jose Aldo and Henry Cejudo interest you?