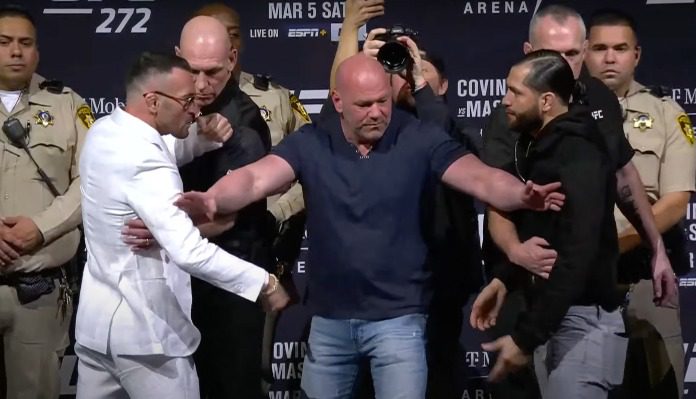 Colby Covington has pressed charges against Jorge Masvidal for the alleged incident at a Miami restaurant.

Covington has since made a formal statement to police in Miami Beach, Fla. this week to move forward with charges against Masvidal. MMA Fighting was able to retrieve police documents sharing that Colby went to the Miami Beach Police Criminal Investigation Division where he provided a sworn statement on the incident.

Covington told police that he was attacked by Masvidal outside the Papi Steak Restaurant which fractured his tooth and left an abrasion on his wrist. Covington also reported approximately $15,000 worth of damage to his $90,000 Rolex watch that he was wearing that night.

According to MMAFighting, Colby Covington was able to identify Masvidal by the sound of his voice and his hair sticking out of his hoodie. After ‘Chaos’ provided his statement, police attempted to make contact with Masvidal, and he was instructed to surrender. Masvidal was taken into custody late Wednesday night on aggravated battery with a mask and criminal mischief charges before being released on $15,000 bond.

Should Jorge Masvidal be convicted, he faces a 15-year prison sentence for aggravated battery, which is considered a second-degree felony in Florida. Formal charges are expected to be filed by prosecutors and then a court date will be assigned to Masvidal as proceedings move forward in the criminal case.

Colby Covington and Jorge Masvidal fought at UFC 272 with Chaos winning by unanimous decision in a dominant performance.

What do you make of Colby Covington pressing charges against Jorge Masvidal?