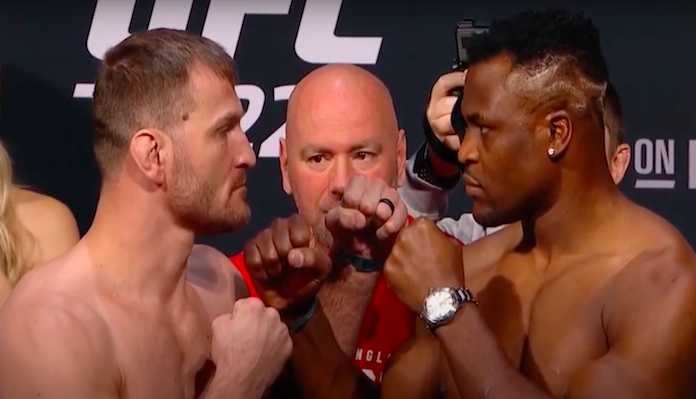 Stipe Miocic and Francis Ngannou will be running it back.

Ever since Miocic defeated Daniel Cormier at UFC 242 in the trilogy, talk of the rematch between Miocic and Ngannou intensified. Now, according to ESPN’s Ariel Helwani, the UFC is planning on having two pay-per-views in March with one being headlined by Miocic vs. Ngannou and the other being Israel Adesanya vs. Jan Blachowicz.

Although the rematch between Miocic and Ngannou is a big fight, according to Helwani, the hope is the winner would face Jon Jones in the summer.

“The UFC wants Stipe Miocic to defend the heavyweight title against Francis Ngannou in March. The title fight isn’t a done deal yet, but that is definitely what the promotion wants, I’m told. In a perfect world, the UFC would like for the winner of that fight to defend the belt against Jones in the summer, sources say,” Helwani reports.

In the first fight between Stipe Miocic and Francis Ngannou, many assumed Ngannou would win. However, the heavyweight champ took the power shots of Ngannou and used his wrestling to dominate the fight. He won the fight 50-44 on all three judges’ scorecards.

It is good news that the UFC is booking the heavyweight fight for the early parts of 2021. Ngannou has vented his frustration with the UFC and Miocic for holding out and not letting him fight.

Jon Jones, meanwhile, appears likely to finally make his heavyweight debut in 2021. The former light heavyweight champion has hinted at a move for years now but after vacating his belt will indeed make the move. “Bones” has not fought since he defeated Dominick Reyes at UFC 247 to defend his light heavyweight title.

Who do you think will win the rematch between Stipe Miocic and Francis Ngannou? Sound off in the comment section, PENN Nation!