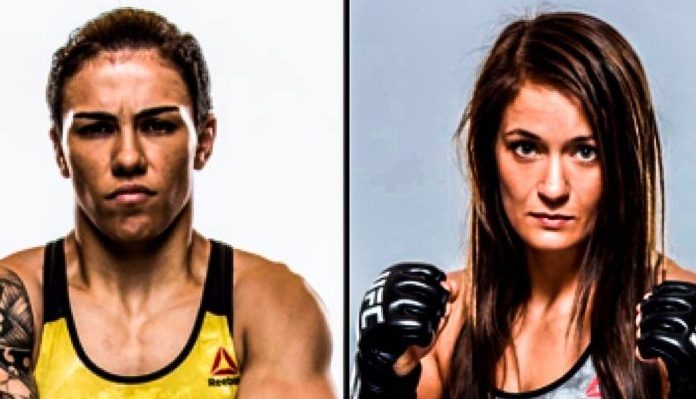 Now that the Rose Namajunas vs Joanna Jedrzejczyk saga is over, for now anyway, the division must move on! And it appears to be making its first steps.

A fight between top strawweight contenders, Jessica Andrade and Karolina Kowalkiewicz that was originally slated to be taking place at UFC on Fox 28 in February…clearly did not happen.

Instead, we saw Andrade take on and defeat Tecia Torres at the event while Kowalkiewicz would go on to defeat Felice Herrig at UFC 223 in an exciting back and forth affair.

But now it looks like we may finally be getting a clash between the two as ESPN is reporting that the fight is in the works for UFC 228 which takes place on September 8th. The location for the event has yet to be announced but Dallas, Texas appears to be the likely landing spot.

After the champion, Namajunas’ wins over Jedrzejczyk, the clear next contender was Andrade. But with Namajunas’ recent revealing of a fairly serious sounding injury to her neck she doesn’t plan on fighting any time soon. Which leads to Andrade needing to keep busy.

And the same goes for Kowalkiewicz who is right up there with Andrade as one of the top contenders. In fact, to earn her first UFC title shot against Jedrzejczyk when she was the champion, Kowalkiewicz defeated Namajunas by split decision. This was Namajunas’ last loss.

Since Kowalkiewicz’ win over Namajunas, she has gone 2-2 first starting with back to back losses to Jedrzejczyk and Claudia Gadelha then getting back on track by beating Invicta FC veteran, Jodie Esquibel and the previously mentioned Herrig.

After Andrade’s lone strawweight loss to Jedrzejczyk, she defeated Gadelha and Torres both in dominant fashion to create her current streak.

If this fight ends up happening, it would come as a complete shock if the winner doesn’t face Namajunas once she’s ready to fight again.