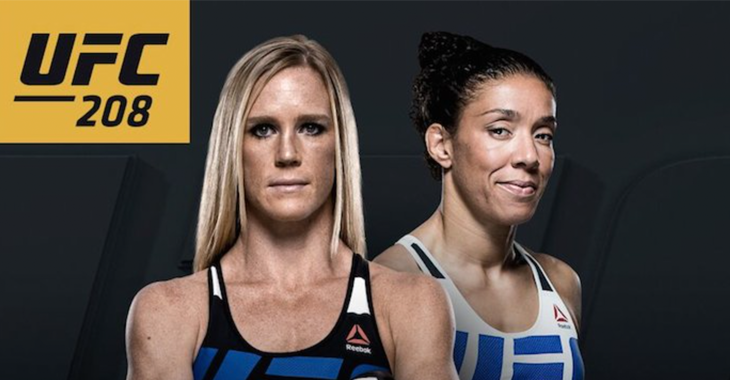 Last night, the UFC made its first stop in Brooklyn, New York with UFC 208. The card was headlined by a bit of history, as the main event crowned the UFC’s first-ever women’s featherweight champion. In corner of this main event, we had former women’s bantamweight champion Holly Holm. In the other, we had Dutch kickboxing import Germaine De Randamie.

Though it was not a particularly riveting fight, this one ultimately went to De Randamie. Given the fact that Holm seemed to steal the second half of the fight, and that De Randamie landed two blatant shots after the bell, however, this outcome generated immediate controversy among MMA fans. Holm and De Randamie’s fellow fighters, of course, also had plenty to say about this iffy outcome.

Here are some of the best fighter reactions to De Randamie and Holm’s fights, De Randamie’s shots after the bell, and De Randamie’s close decision win over Holm.

And @IronLadyMMA finding that timing for her right hand to land. Power shots for days @ufc

That punch at the end 😱

Ref not being on top of separating them properly allowed that strike to be thrown, and land, late. #ufc208

How the hell is this ref doing a world title fight!!

That's a point right now WTF!!!! Next foul should be a DQ

I don't agree with Joe! Defend yourself at all times. Classic Muay Thai mentality! Fight until you are separated. #UFC208

I got @HollyHolm winning that fight.

I think we have a new champion

Wow are you kidding me!!!

Oh shit… As I retract my statement… Congrats @IronLadyMMA for the belt and @HollyHolm for the great fight. @ufc 😁🙏😳😸

Controversial or not, this win makes Germaine De Randamie the first ever women’s featherweight champion in UFC history. She’s now on a three-fight win-streak, having proceeded this title win with stoppage defeats of Larissa Pachecho and Anna Elmose. The new champ’s overall record now stands at 7-3 in sum.

At a glance, it would seem that this win lines her up for a title defense against the fearsome Cris “Cyborg” Justino. Post-fight, however, she explained that she will be getting some surgery done on her hand, which will keep her out of action for some time. Cyborg, of course, will also be on the shelf for a time, as she is currently dealing with a potential USADA suspension.

In defeat, Holm falls onto a three-fight losing streak, having proceeded her career-changing knockout of Ronda Rousey with losses to Miesha Tate, Valentina Shevchenko, and now Germaine de Randamie. She now owns an overall record of 10-3.

What did you think of Germaine De Randamie’s shots after the bell? How did you score the fight? Sound off, PENN Nation!