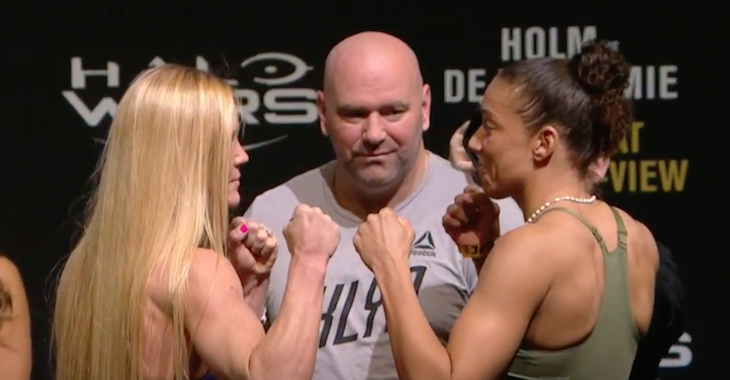 Round one begins and de Randamie moves forward quickly and throws a right kick to the body. Holm throws a side kick that misses. She presses forward with a combination. Germaine responds with a leg kick. Holly replies with a hard low kick of her own. Holm is using a lot of movement here. Germaine lands a nice right hand. Holly charges forward with a combination but does not connect. A nice kick lands for Holly. Germaine replies with a right hand. Holly comes forward and lands a hard leg kick. She circles out and then charges forward but eats a left hand. Germaine follows that up with a right. Holly lands another hard leg kick. De Randamie fires back with a big right hand. Interesting that Holly hasn’t even fainted for a takedown attempt yet. One minute remains. Holly shoots in for a takedown. Germiane defends but Holly has her pressed against the cage. Holm is working on a single leg. She can’t get it. 10 seconds remains. Holm keeps Germaine pressed against the cage to close things out.

Round two begins and Holly lands a leg kick to start. She presses forward and lands another. GDR replies with one of her own. Holly circles and then leaps in with a leg kick. Germaine lands a nice counter right hand. Holly connects with a right hand after missing with a high kick. Another good combination scores for Holm. She seems to be finding her range. Holly with a front leg side kick. She circles out. Another nice counter right hand scores for de Randamie. Holly shoots in and presses GDR against the cage. She lands a nice knee inside. Both women trade knees in the clinch. Holly with another knee. She drops down for a single leg but can’t find it. Germaine switches the position and they trade knees. A solid knee scores for GDR. Holly switches the position and presses her against the cage. Holly lands a knee and briefly takes her back. She presses Germaine back up against the fence and the fighters trade knees to close out the round. GDR lands a late shot after the bell and Holly is rocked. That is not good.

That counter right from @IronLadyMMA continues to find a home! #UFC208 pic.twitter.com/jYp5DlPDvw

Round three begins and Holy lands a leg kick to start. She charges forward with a combination. She appears to have recovered from the late shot in round two. Another leg kick from Holly but Germaine responds with a hard right. Holly comes forward with a kick to the body. She follows that up with a side kick to the body. GDR lands a leg kick. Holm connects with a left but GDR lands a right hand. That counter right is working really well for Germaine. Holly circles out and misses with a front kick. She presses forward and lands a leg kick. Germaine replies with one of her own. Holly again with a hard leg kick. Holly ducks under a punch and attempts a takedown. It is not there and she eats a combo from GDR. They break and Germaine lands another solid right hand. Holly scores a head kick and ten follows up with another. The horn sounds and Germaine again hits Holly late.

Round four begins and Holly misses with a head kick. She charges forward with a combination but does not connect. Both women land leg kicks. They engage in the clinch and Holly presses Germaine against the cage. Holly is working some short shots from the position. The referee steps in and tells the fighters to break. Germaine lands a leg kick. Holmn responds with one of her own and then another. Another chopping leg kick from Germaine. She lands a nice left jab on Holly. Holm circles and lands a side kick to the thigh. The women briefly clinch and Holly lands a nice body kick on the break. Germaine lands a left and then a nice leg kick. Holly pushes forward and presses her against the cage. Holm with a nice knee inside. She picks GDR up but cannot get her to the floor. Good knees from Holm here in the clinch. Holly attempts a trip but Germaine stays on her feet. The ladies exchange knees and then break. Round four comes to and end.

Round five begins and Holly lands a right hand. Germaine replies with a right and then a hard leg kick. Holly comes forward and lands a leg kick. She follows up with a high kick which is blocked. Another solid kick from Holm. “GDR” appears to be slowing down. Another body kick from Holly. Germaine replies with a right hand. Holly circles out. Holm connects with a left hand that stuns Germaine. Holly pushes her up against the fence. She lands a nice elbow. Holly is digging deep for a takedown but cannot get it. The referee steps in and breaks them up. Holly lands a left and then a leg kick. Germaine misses with a kick and Holly pushes her up against the cage. Holly with a nice shot inside. Germaine replies with a knee. Good knees from both ladies now. 40 seconds remain. They finally break with 10 seconds left. Germaine with a left hook. Holly with a leg kick. The horn sounds to end the fight.