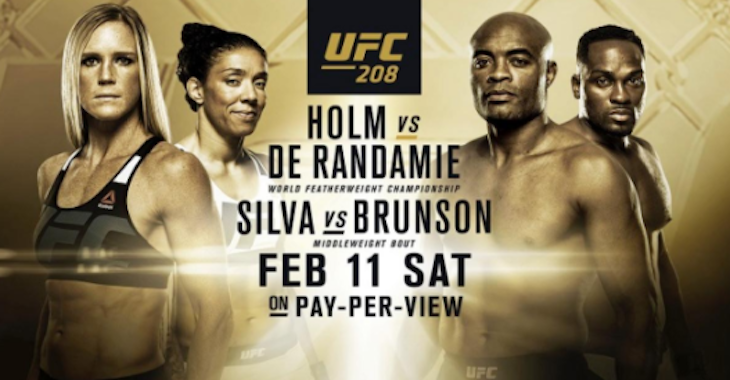 This Saturday, the UFC will make its debut in beautiful Brooklyn, New York with UFC 208. Keep reading for all the information you need on the UFC 208 fight card!

Holm will enter her main event battle with De Randamie on an unfortunate, two-fight skid, as she has given up her last two bouts to Valentina Shevchenko and Miesha Tate. In her most recent bout before these losses, she scored a career-changing knockout win over Ronda Rousey. De Randamie, meanwhile, will enter this historic bout on a two-fight streak, having stopped Larissa Pachecho and Anna Elmose in her most recent bouts.

Silva will step into his co-main event battle having in the midst of a rough stretch. In his last five bouts, he was been decisioned by Daniel Cormier in non-title light heavyweight bout, narrowly defeated by Michael Bisping, and stopped twice by Chris Weidman. In the middle of those four bouts, he defeated Nick Diaz by decision, but unfortunately, this result was overturned when he tested positive for banned substances. Brunson, on the other hand, was recently shut off by Robert Whittaker. This loss marked the end of an impressive, five-fight streak.

Here’s a full rundown of the UFC 208 fight card, from beginning to end:

Which of the many awesome bouts on the UFC 208 fight card are you most excited for? Sound off, PENN Nation!