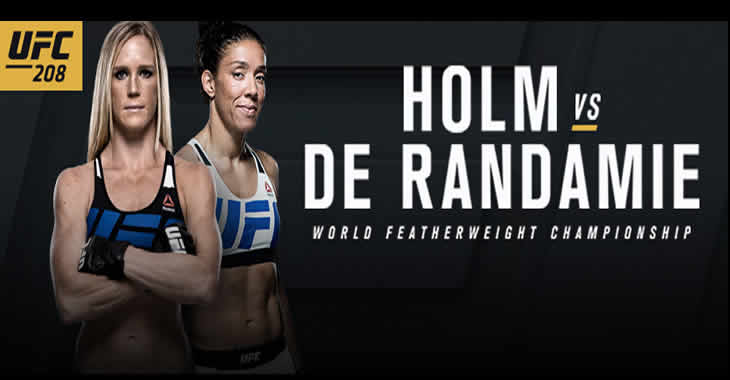 This Saturday in the main event of UFC 208, Germaine de Randamie will step into the Octagon to fight former UFC women’s bantamweight champion Holly Holm in a highly anticipated showdown for the inaugural women’s featherweight championship.

While fight fans are certainly familiar with Holm due to her famous knockout win over Ronda Rousey at UFC 193, Randamie is still relatively young in the sport, with only 9 professional MMA fights. With that being said however, Randamie had a 37-0 professional kickboxing record before making the transition to MMA, making her an extremely experienced fighter. Ahead of her fight with Holm, de Randamie spoke to MMAJunkie to defend her experience in combat sports:

“A lot of people don’t know my credentials in kickboxing,” de Randamie (6-3 MMA, 3-1 UFC) told MMAjunkie in advance of her title bout opposite former bantamweight champ Holly Holm (10-2 MMA, 3-2 UFC) at UFC 208. “I’ve fought the best, the top of the top, the best female fighters in the world – in three weight divisions. I fought a man who had 40 pounds over me, and I knocked him out.”

“If we talk about credentials, I think I’m right where I want to be,” de Randamie said. “After Saturday, nobody will ever forget me again.” Randamie will be entering into the fight one a 2-fight win streak that has seen her pick up back to back TKO wins. Most recently, The Iron Lady stepped into the Octagon in front of her hometown fans in Rotterdam, where she picked up a 1st round TKO win over Anna Elmose. The win made it two straight after her UFC 185 win over Larissa Pacheco.

Will De Randamie be able to cement her place in the UFC with a win over former champion Holly Holm on Saturday? Give us your predictions in the comments section below!