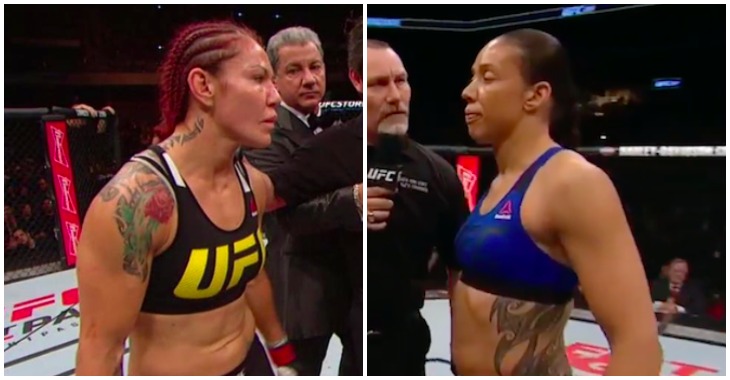 Though nothing is confirmed just yet, it’s very possible that new UFC women’s featherweight champion Germaine de Randamie’s first title defense could be against destructive MMA superstar Cris “Cyborg” Justino. If this is indeed the way things unfold, De Randamie will likely enter the fight as a substantial underdog.

According to beloved  MMA veteran Bas Rutten, however, De Randamie should not be discounted in this potential title fight. On a recent episode of The MMA Hour, the fighter-turned-commentator explained that he was impressed by De Randamie in her title-winning defeat of Holly Holm, and that he believes she stands a good chance against Cyborg.

“I knew that, in the striking department — once you’re 47-0 and you’re in Holland, and you do it in Europe, it’s a different kind of level there, the striking, than it is overseas. It simply is. The striking is just at a real high level because everybody is doing it,” Rutten said. “It’s almost like soccer. You’ve got gyms everywhere. Every week, there’s fights everywhere, in bars, in little sport gyms. Whatever it is. There’s a lot of Thai boxing, and because a lot of people do it, a lot of people are very good at it. So I knew that her striking was going to beat Holly Holm’s striking, although I’m very impressed with Holly Holm as well.”

“Jorina Baars, she’s from Holland, she beat Cyborg in Lion Fight,” he continued. “So yeah, I do think that [de Randamie] can hang with her,” Rutten said. “But I think once Cyborg gets ahold of her and she can throw her down, we’re going to have a big problem. [De Randamie] really wants to keep this fight standing against her, and keep the distance between them. You want to stay outside the distance just enough that you can counter, but do not go clinching with Cyborg. I think that’s a bad thing.”

What do you think of Bas Rutten’s assessment of a Germaine de Randamie vs. Cris “Cyborg” Justino fight? Sound off, PENN Nation!