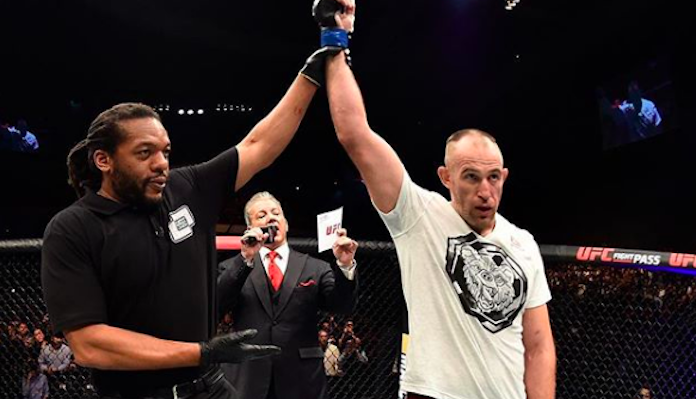 Former UFC heavyweight champion Fabricio Werdum returned to the Octagon at tonight’s UFC 249 event for a bout with Aleksei Oleinik.

Werdum (23-8-1 MMA) had not competed since suffering a knockout loss to Alexander Volkov in March of 2018. Following his setback to Volkov, the Brazilian submission specialist was flagged by USADA for the banned substance Trenbolone and received a two-year suspension.

As for Aleksei Oleinik (58-13-1 MMA), entered UFC 249 looking to build off the momentum of his second-round submission victory over Maurice Greene which occurred in January at UFC 246. ‘The Boa Constrictor’ had gone 3-2 over his past five fights overall.

Tonight’s heavyweight attraction proved to be a back and forth affair. Oleinik had more success on the feet, but Werdum did well in the grappling department. After fifteen minutes of action, the judges awarded Oleinik then winner by way of split decision.

Check out how the pros reacted to Aleksei Oleinik defeating Fabricio Werdum below:

Oliyniek doesn’t give a f#%k about jujitsu.

Most improved physique goes to Olenik

Yo Oleinik’s striking is awkward but effective AF

Oleinik’s cardio is good. He took a few deep breaths and went right back to it. Man, such a good fight. #UFC249

Hmm close fight. Could be. Draw.

Who would you like to see Aleksei Oleinik fight next following his victory over Fabricio Werdum at tonight’s UFC 249 event in Florida? Share your thoughts in the comments section PENN Nation!

This article first appeared on BJPENN.com on May 9, 2020