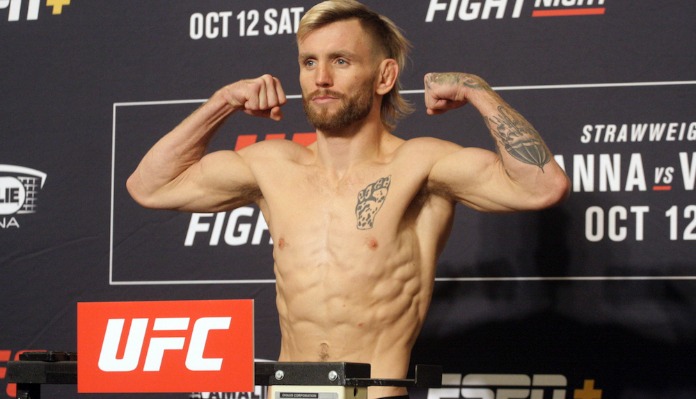 Tim Elliott is now in a place where he doesn’t have to take any fight that comes his way, and that is what happened when Su Mudaerji pulled out of their fight in June.

After his opponent pulled out, Elliott was offered Manel Kape on short notice which he turned down as for him, he only wants ranked guys. He also says he’s in a position now where he is being smart about his career and not taking any fight that comes his way.

“They kind of tried and it was difficult for me. I’ve never been a guy who turns down fights, and I really liked the Su fight because he is ranked and coming off two or three wins in a row. Stylistically it was a good matchup so when he got hurt it was disheartening,” Elliot said on Just Scrap Radio on BJPENN.com. “They offered me Manel Kape so I felt like stylistically it’s not a bad fight, and a fight I’d want in the future but to fight a guy on a losing skid on a weeks’ notice. The UFC told me I’d have to wait if I didn’t take it but if I did wait they’d give me a ranked guy on a winning streak which is what I got.”

Although Elliott had to wait until October, he got his wish of a ranked opponent as he will fight Matheus Nicolau at UFC Vegas 39.

It’s an intriguing matchup and for Elliott, he knows this fight will likely go the full 15 minutes. Elliott says he likes fighting and knows the way to win and is to take his opponents to deepwater and drown them which he plans to do here.

“It sucks that it is always this way but the way I fight, it will probably be a three-round fight,” Elliott explained. “I would love to get a KO or submission but I like to fight and I train to fight for 15 minutes, and I like to get ring time in. This fight is the same way as to how I beat most people and that is to take them into deepwater, make them uncomfortable for 15 minutes and get my cheque and onto the next one.”

If Elliott beat Nicolau he has two names in mind for his next fight. He wants to rematch Askar Askrov as it’s a fight he wants back or face Cody Garbrandt. Elliott wants to start to work his way up the rankings and he knows those two fights do exactly that.

“I want to get another one right away. The division, there are crazy things happening so if you are waiting you are going to get passed by. I want the UFC to know I’m here to fight and I want to fight the name guys,” Elliott said. “If I get this win, I would love that Askar Askarov fight back. It’s a fight I can win and should’ve won and even Cody Garbrandt he’s a guy I want to fight. That’s a fight with more eyeballs on me.”

Do you think Tim Elliott will beat Matheus Nicolau at UFC Vegas 39?