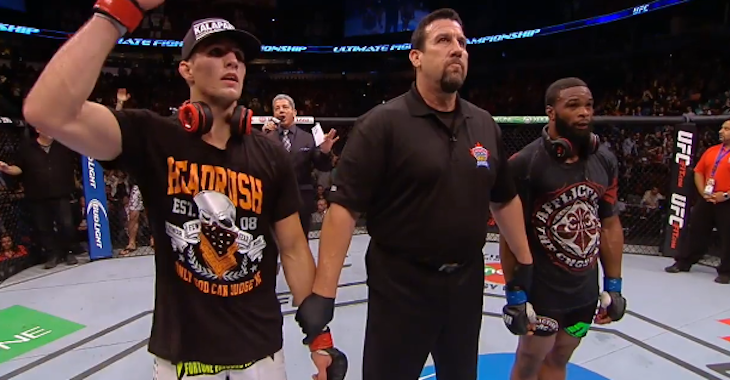 Having defended the welterweight title twice – albeit in two close fights with the same man – UFC welterweight titleholder Tyron Woodley is looking like he could emerge as a pretty dominant champion. We do, however, know that he can be beaten. Rory MacDonald was the most recent fighter to prove this.

MacDonald beat Woodley in June of 2014, outworking him to a unanimous decision win. In the years since then, the two fighters have diverged on very different paths, with Woodley claiming UFC welterweight gold, and MacDonald departing from the UFC to set up shop under the Bellator MMA banner.

As he prepares for his May showdown with fellow UFC veteran Paul Daley, MacDonald took time out of his schedule to chat with BJPenn.com’s Chris Taylor. One of the topics they covered was the fact that Woodley – a man he soundly defeated – is now the UFC champ. Apparently, this isn’t especially bothersome for the Canadian.

“It doesn’t bother me to much to see someone else who I have beaten as the UFC welterweight champion,” he said. “I just think it makes me look better at the end of the day. Obviously it kind of irritates me that it is not me wearing the belt and that it is somebody who I’ve beaten. But, I’ve realized a lot of what happens in this sport has to do with timing. Tyron had some really good timing with different match-ups where he obviously found some good success. You see it all the time though. Conor McGregor, in four years that guy went from zero to the biggest name in the sport ever. And again I think that success had a lot to do with timing. So I am sure that I am going to have my time to shine too, just right now I had to step away from the UFC in order to get a better deal.”

What do you think of these comments from Rory MacDonald? Sound off, PENN Nation!