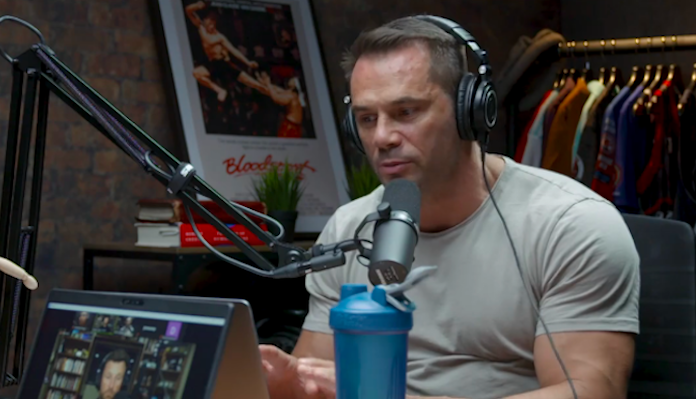 Rich Franklin wears many hats. He’s a former UFC champ. He’s a ONE Championship executive. He’s the President of ONE Warrior Series and the host of the web series of the same name. And now, he’s a podcast host.

Last week, the former UFC middleweight champion announced the launch of his new podcast, Franklin Speaking, which is co-hosted by his ONE Warrior Series co-star Jonathan Fong.

Franklin had been planning on launching this podcast for quite some time, but never had quite enough bandwidth to get it off the ground.

His schedule finally opened up enough to launch the podcast when the coronavirus pandemic began forcing people to stay indoors.

“We’ve been working on this Franklin Speaking podcast for some months now,” Franklin told BJPENN.com. “This whole situation, with the quarantine, it actually was kind of a blessing in disguise, because it just gave us the time to redirect where we wanted to go. So instead of seeing this whole thing as an obstacle, I saw it as an opportunity and just took advantage of taking my team and moving in a completely different direction with something new.”

The first episode of the Franklin Speaking podcast launched last week. The second episode dropped on Monday night. Both of these episodes featured Franklin and Fong’s conversation with Brian Cain, a mental performance coach and international best-selling author.

While many of Franklin’s guests, like Cain, will have ties to the sports and martial arts worlds, he says he can expect a guests from a gamut of industries as the podcast develops.

“It’s going to be a mixed bag of people,” Franklin said. “I think what I’ll do is I’ll kind of start with my wheel house.

“I’m sure that we’ll probably stick to things that I have interest in like physical training and nutrition and healthy living and motivation, but I would love to get into some current hot button topics and have open discussions and learning. I’m all about learning. I think that’s something that I’ve taken from my university studies and being a high school teacher. I’m a lifelong learner. I either want to disseminate information to people or I want to bring people on the show that can disseminate information to people so that people walk away, like I said, impacted, educated, inspired, and entertained.”

While Franklin’s new podcast is still in its infancy, he’s expecting big things from the project. The first episode, he says, was a massive success, and he expects that trend to continue.

“The sky’s the limit,” he said. “The premier, on ONE Championship’s Facebook, we did more than double the numbers that we expected for the first episode. I was really happy about that.”

While Franklin is excited to see his podcast become successful, he’s also excited for another opportunity to affect positive growth in the lives of his fans and followers.

“I think the thing I’m most excited about is sitting down with people in various areas of expertise and having open-table discussions about any topic, and learning myself, learning personal growth and helping the listeners with their personal growth.”

Stay tuned to the ONE Championship Facebook page for upcoming episodes of the new Franklin Speaking podcast from Rich Franklin.