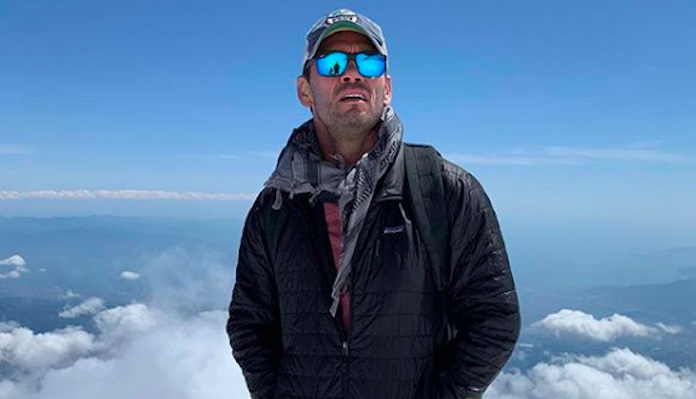 Where in the world is Rich Franklin?

Depending on when you ask that question, the answer might be Singapore, Mongolia, Australia, Myanmar, Pakistan — any far-flung corner of the planet you can imagine. As the President and host of ONE Warrior Series, the former UFC middleweight champion is almost always on the move.

It’s a life he never would have imagined for himself when he was still living in the US, at the height of his career with the UFC.

“I went to university to be a high school teacher,” the UFC Hall of Famer told BJPENN.com with a laugh. “When you look at the path of my life — where I’ve been and what I’ve done — I never would have dreamed my life would play out this way.

“It’s a really cool position to be in.”

ONE Warrior Series, for those unfamiliar, is equal parts travel show and ONE Championship talent-scouting program. It’s a bit like Anthony Bourdain’s No Reservations with the added goal of finding martial arts talent.

“The concept of this whole thing was kind of modeled after Anthony Bourdain’s No Reservations,” Franklin said.

“Part of my job is to unearth the culture,” he continued. “That can be anything from different customs to different types of food, different sports… Then of course you have the athletes. On that side of things, you tell the story of the athletes, whatever their story may be: what life is like for them, struggles they’ve had in the past, and how those things relate the martial arts game.

“You get people from all walks of life. It’s really amazing.”

Unsurprisingly, Franklin enjoys his work. In fact, he loves it.

When the idea was first broached in the earlier chapters of his ONE Championship career, however, he was hesitant. It sounded like a lot of work, and he was already busy enough.

“When I first relocated [to Singapore], I was handling several different things for the company,” he said. “The company was using me in a lot of different ways all over the place and I had all these responsibilities, and then the CEO, Chatri, he comes to me and he says, ‘I have this idea.’ It was pretty much the framework of what we’re doing now. When he told me this, I looked at him, straight up, and I said, ‘absolutely not.’

“I had so much on my plate at the time, I just couldn’t handle one more thing,” he continued. “[Sityodtong] just kind of patted me on the shoulder, and was like ‘yep, you’re going to do great.'”

The rest, as they say, is history.

ONE Warrior Series is now in full swing. The show is taking Franklin all over Asia, and increasingly further afield in search of undiscovered martial arts talent.

Over the course of each episode, he gets to know local, up-and-coming athletes, and if he likes what he sees, he signs them to ONE Warrior Series, which is effectively ONE Championship’s farm team.

The fighters that perform well in ONE Warrior Series then graduate on to the main ONE Championship roster with exclusive contracts worth north of $100,000 USD in sum.

Rich Franklin takes great joy in being able to hand out these life-altering contracts, though it is not always easy to decide who gets them and who doesn’t.

“Doing this show can come with a tremendous weight,” he said. “Oftentimes you have these matchups where I went to one athlete’s village and spent several days with him, and then I went to another athlete’s town and spent several days with him, and I’m sitting there scratching my head, knowing their backstories, knowing both of these guys came from poverty and they’ve sacrificed everything; that this is their escape…

“You see two guys like that get into the ring, and you hate seeing it, because somebody has to lose. That’s the reality of it. When you get to know the guys, you just want everybody to succeed. So it does feel good to give out these contracts, but at the same time, there are more people not earning contracts —that’s pure statistics — so there’s a real sense of responsibility with that.”

While not every athlete featured on ONE Warrior Series ends up signing a contract, many do, and some become bona fide stars for the promotion. There’s no better example of that than Thailand’s Stamp Fairtex.

To see ONE Warrior Series graduates like Stamp succeed at such a high level fills Franklin with pride.

“I’m like a proud papa,” he joked. “My entire team, even the production people, everybody, we all become invested in [these athletes].

“There’s a personal feeling of pride, but then secondly, there’s this point where we can actually step back and, as a team, collectively give ourselves a pat on the back because we’re doing our jobs when people are rewarded contracts and they come through to ONE championship and they’re winning. We’re finding the right kind of talent that we need to find.”

Suffice it to say that ONE Warrior Series has been tremendously successful so far. Rich Franklin expects more of the same in the coming years. That means more adventures in new destinations, and more undiscovered athletes migrating to ONE Championship and dominating.

“I’m hoping that if you were to fast forward the clock five years from now, every champion that holds a ONE championship belt will have come through ONE Warrior Series,” Franklin concluded.