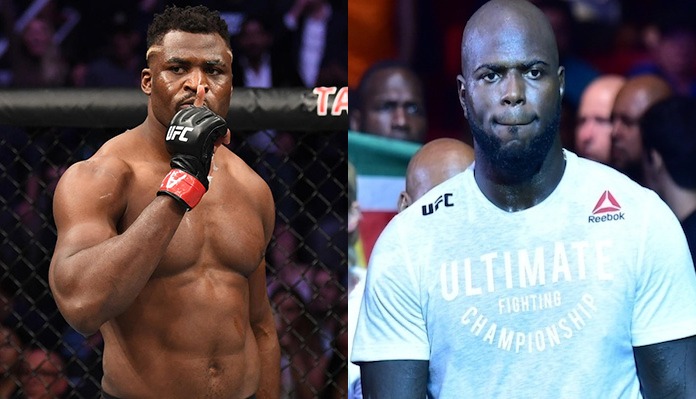 On the stacked UFC 249 main card, Francis Ngannou takes on undefeated contender, Jairzinho Rozenstruik. Heading into this fight, Ngannou is a -275 favorite while “Bigi Boy” is a +215 underdog.

Ahead of the fight, BJPENN.com reached out to several pro fighters to get their predictions for the scrap. The pros believe the scrap ends by knockout where the majority lean towards Ngannou getting his hand raised.

Yorgan De Castro, UFC heavyweight: I trained with Francis Ngannou for 10 days at Xtreme Couture and I think he will win. He’s so powerful, so strong, and such a hard-working guy. He’s getting better and more well-rounded.

Eryk Anders, UFC middleweight: I think Ngannou wins. Rozenstruik is the faster fighter, but he’s not a big guy. I think Ngannou has a better chin than who Rozenstruik has been fighting. The thing with Ngannou is all he needs to do is land one. So, I think he wins.

Steven Peterson, UFC featherweight: Both guys have the potential to knock each other into the next dimension. I believe Rozenstruik has shown much tighter striking and will beat Ngannou to the punch. He’ll KO him in the first before he ever has a chance to get off.

Randy Costa, UFC bantamweight: I’ll go with Francis, it’s 50/50 though. These big boys don’t play games. Both can literally kill the other with one punch. I just like Ngannou’s experience, but Rozenstruik has a gas tank. Man, who the f**k knows. I’m just happy I’m not in the cage with them.

Mirsad Bektic, UFC featherweight: Ngannou by KO. Man, what a fight this will be.

Beneil Dariush, UFC lightweight: I actually see Rozenstruik winning this one in the second round. He’ll knockout Ngannou.

Renato Moicano, UFC lightweight: This is a crazy fight. Two big boys, it could go either way. But, I liked what I saw from Rozenstruik in his last fight so I think he knocks out Ngannou.

Benito Lopez, UFC bantamweight: I’m going to have to take Francis Ngannou by first-round TKO or KO. But it could go either way as Rozenstruik is no joke. This is a crazy fight.

Juan Adams, ARES FC heavyweight: Ngannou will win in the third round by knockout.

Allen Crowder, former UFC heavyweight: I want Rozenstruik to win and think he will. I hope he KO’s Ngannou so I’d feel better about him knocking me out [laughs]. I know for a fact he has one-punch knockout power.

ICYMI: The pros already picked the Ferguson-Gaethje and Cejudo-Cruz fights.

Who do you see winning between Francis Ngannou vs. Jairzinho Rozenstruik? Let us know in the comment section!