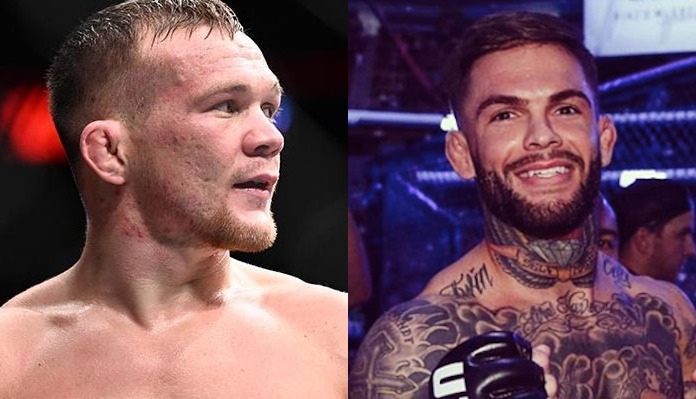 According to Yan, nothing really happened backstage other than Garbrandt being all talk and not backing up his words.

“Nothing really happened. Cody wrote ‘get this mfer’ on Dana White’s Instagram page, I jokingly replied that ‘you are next, no chin’ and he tried to act tough and crossed the line by commenting that he will see me tomorrow and smack me like a little hoe,” Yan said to BJPENN.com through his translator Sayat Abdrakhmanov. “You all saw what happened when he saw me face to face. He was hiding his hands behind the back first and then acted all emotional, needless to say, he didn’t back his words proving that he is all talk. He is a puppy. He only barks but doesn’t bite.”

Although the two got into it and a rivalry was formed, Yan has no interest in the fight right now. Instead, he is eyeing a title shot against Henry Cejudo while Garbrandt is on a three-fight losing skid.

“To be honest at this stage of my career I’m not interested in this fight at all. I believe I deserve to fight for the title next and will talk to UFC about that first. After that, we can plan and see what fights will make sense. In the future, it’s still possible if he can get back in the mix. I would love to put on a Russian boxing clinic on him.”

Petr Yan says if he and Cody Garbrandt do end up fighting in the future, it would not be close. He is confident he would knock out the former champ and believes Garbrandt is only calling him out now because he is the one on the rise in the division.

“Maybe he has speed and power but he can’t take a punch. So it’s just a matter of time before I can catch him and after that, you will see another fall of the man with no chin,” he said. “Now I understand he talks big just to stay relevant. Trying to attach his name to mine, because I just won the fight and  I’m on the rise. He needs to win a fight first before calling me out.”

Would you be interested in seeing Petr Yan vs. Cody Garbrandt in the future?