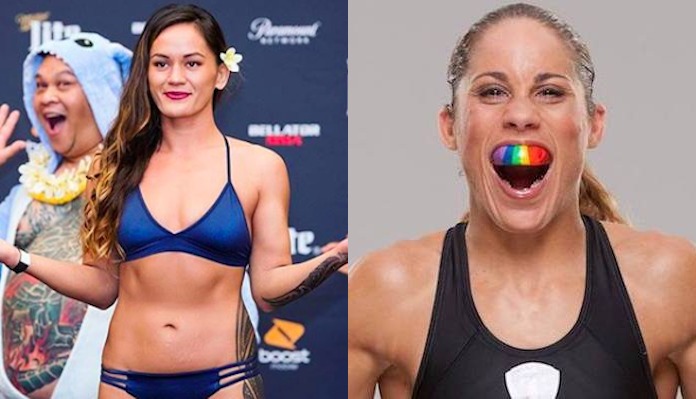 Ilima-Lei MacFarlane is not happy about how the way the UFC released her friend and teammate Liz Carmouche.

The two-time UFC title challenger Carmouche was released while she was in Washington D.C. doing promotional work for the company.

The Bellator flyweight champ MacFarlane believes that just shows how scummy the UFC is to fighters.

“Yeah, I thought it was really s**tty in the nature it happened. But, I also think it was for the best because Liz needs to be somewhere that actually appreciates her and respects her. I don’t think that they did either of those when she was in the UFC,” MacFarlane told BJPENN.com. “Looking at the silver lining, it couldn’t have happened in a better way. It shows how scummy they are to her. You are going to cut her while she is doing a promotion for you out in D.C. and f**king make her pay out of pocket to go do that s**t. It was hard at first to see them treat her like that. But, the silver lining is she will find a new home and hopefully it is with Bellator. This is a new chapter of her life.”

If Liz Carmouche does sign in Bellator, Ilima Lei-MacFarlane says the two friends have already talked about it and that they will fight each other for MacFarlane’s flyweight title if need be. But the ideal scenario is for Bellator to open up a bantamweight division so one of them can go up in weight and become a champion there.

“Who said we would never fight? Nah, we beat the s**t out of each other every day, we would totally fight each other,” MacFarlane said “It is not an issue at all, we have already talked about it. That doesn’t mean we wouldn’t want a bantamweight division opened up,” she explained. ‘So, that is something we are working for. Just open the 135. But, if it came down to it, me and Liz would totally try and kill each other.”

Carmouche is reportedly negotiating with Bellator while MacFarlane is preparing for her upcoming title defense against Kate Jackson in Hawaii.

Do you think Liz Carmouche will end up joining Ilima-Lei MacFarlane in Bellator?