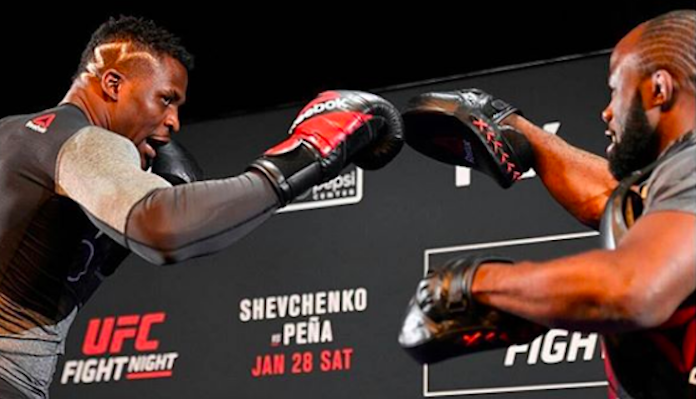 UFC heavyweight Francis Ngannou is preparing for a possible title eliminator at UFC 249 on April 18 against Jairzinho Rozenstruik, but he has very high goals for his entire fighting career.

In an exclusive interview with BJPENN.com’s Inside The Cage, Ngannou was asked about a potential crossover to boxing later in his career, and he said it’s something he’s very serious about because it was his first dream.

Francis Ngannou (⁦@francis_ngannou⁩) is serious about a move to boxing later in his career, not just a one-fight deal:

“I want to make a statement in the boxing world.”

“Definitely, there’s not a doubt about it,” Ngannou said. “I want to crossover. I want to make a statement in the boxing world because that was my first love, that was my first dream. Before MMA came around, I was all about boxing. At some point in my life I have to do whatever I like, whatever I love to do, to check all those boxes in my life timeline to do things.”

The boxing heavyweight division is currently populated by the likes of Tyson Fury, Anthony Joshua, Deontay Wilder, and Andy Ruiz. Ngannou believes with the right preparation, he would be ready for any of those names. While big fights likely await him in the boxing world, Ngannou reiterated that this would not be a one-fight deal, it’s something he really wants to make a part of his combat sports career.

“Honestly I think, obviously with good preparation I can matchup with any of those guys,” he said. “But once again, I’m not just going there for one shot, so I’m probably going to have multiple fights that will give me more opportunity to matchup with many of those guys, if it’s not all of them. I’m really willing to do that.”

While getting back to the UFC heavyweight title picture is certainly the current goal for Ngannou, he seems very serious and dedicated about a future move into the boxing world. Unlike when Conor McGregor made the jump to boxing for a one-fight deal with Floyd Mayweather, Francis Ngannou seems set on pursuing a full-time boxing career, with his sights set on the best boxers the heavyweight division has to offer.