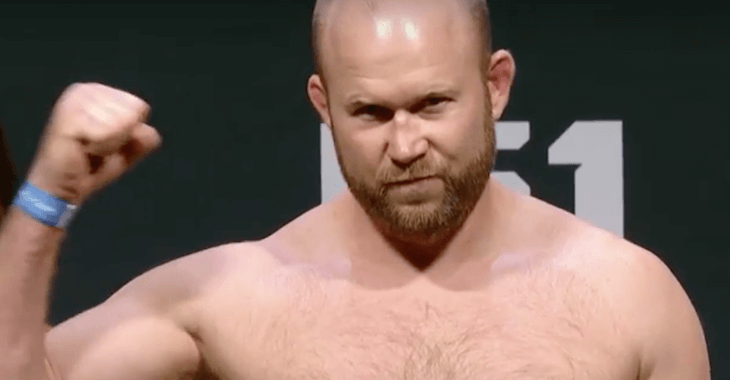 This Saturday, on the main card of UFC 208, Tim Boetsch will take on the incredibly dangerous Ronaldo “Jacare” Souza. If he’s able to spring the upset against this highly regarded foe, he will find himself in the top-end of the middleweight rankings, where fights with foes like Chris Weidman, Gegard Mousasi, Yoel Romero, and champ Michael Bisping could await.

All four of the aforementioned men, of course, are currently busy. Weidman and Mousasi will duke it out at UFC 210, while Bisping and Romero are expected to fight for the title sometime in the next few months.

In a recent interview on BJ Penn Radio, Boetsch offered up his opinion on these two huge middleweight showdowns.

He started with Mousasi vs. Weidman:

“Normally I would say hands down Weidman,” he said. “I’m not sure what’s been going down in his camp or what’s been happening lately but he certainly hasn’t been looking himself. Not only in the octagon but physically when you see him. He seems different. I don’t know if he has a different nutritionist that his him on some low caloric intake or some vegan diet. I don’t know what the heck they’ve got him doing but I hope we see the Weidman of old. That dude is tough and he’s a tough fight for anybody so I hope he shows up. I want to see him get the win, I like the guy. Nothing against Mousasi, I’ve just been a Chris Weidman fan for quite a while. He’s got the wrestling background and I respect the guy. Not that I don’t respect Mousasi, but I’d just like to see Chris get back to his old ways. Then if he can get the win, I’d love to square off with him.”

Next, Tim Boetsch gave his take on Bisping’s yet unscheduled title showdown with Romero.

“Bisping is a guy that understands the sport and knows how to win fights, obviously,” he said. “He’s the champion. That being said, Romero is dangerous, explosive, and he’ll clearly cheat in the fight. You never know what you’re going to get with that guy. I’d really like to see Bisping take him out. My opinion of Bisping has changed over the years. He’s an older fighter now. I used to think about wanting to see him get beat up but I’m not sure what changed in my mind about him. He’s actually a likeable guy when you meet him and I really want to see him hold onto that title. I have this fantasy that I can get in there and take it from him in a couple of fights. We’ll see how it all plays out. He’d gotta get through Romero and that’s not going to be an easy task but I think he can do it. Bisping always shows up in shape and that’s one thing I question about Romero. If Bisping can keep the action going and drag him into those later rounds, he’ll be able to pick Romero apart. I’m hoping that’s the way it goes if Bisping doesn’t get caught early.”

Do you like Tim Boetsch’s assessment of these two huge middleweight battles? Sound off, PENN Nation!