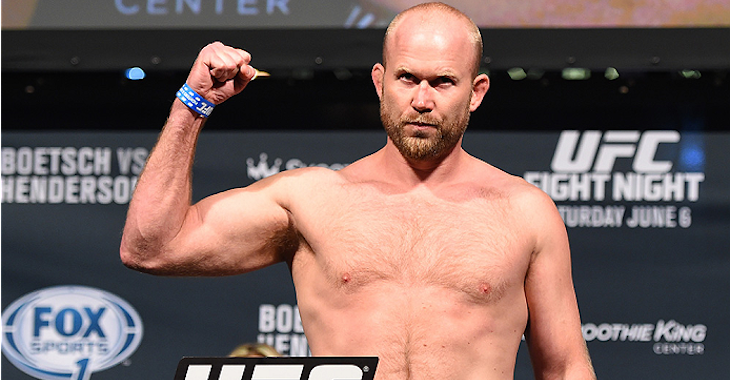 This weekend, on the main card of UFC 208, Tim Boetsch will face one of the biggest tests of his long career in Ronaldo “Jacare” Souza.

Given that Jacare stands out as one of the middleweight division’s top contenders, and Boetsch currently sits on the fringes of the divisional top-15, the announcement of this fight was admittedly a bit of a head-scratcher. That said, Boetsch doesn’t plan to let the opportunity go to waste. Though he knows a prolonged grappling exchange with Jacare is a dangerous possibility, he believes he can out-strike the Brazilian contender, knock him out, and usurp his spot in the top end of the middleweight rankings.

Boetsch explained this plan on a recent episode of BJ PENN Radio.

“[To strike with him is] the obvious thing. He knows that’s my intention and I think he has a confidence in his power. I think he’s going to come out early and try to use that. I know he’s going to be moving forward, looking to hurt me and put me on the cage. But I think all of those things lend well to what I want to do to him. If he thinks he wants to drag me to the ground then that means he’s gotta get within range and if he’s in range, I know I can put my hands on him and I know I can hurt him. I know I can finish this guy and that’s exactly what I plan on doing.”

“I know I have a distinct striking advantage,” Boetsch continued. “I think anybody that’s watched film on him knows that he’s not a striker and I don’t think he claims to be a striker by any stretch of the imagination. That being said, he’s got power and he’s dangerous. He can hurt you if you let him but he also throws pretty wild. Anybody that knows how to counter punch knows that a wild puncher is very open to being knocked out. If he’s coming forward and wants to take this fight to the ground, in doing that he’s moving forward, and I’ll be moving forward too. That always becomes a massive collision and that’s exactly what I’m looking to create with his chin and my right hand.”

Tim Boetsch then explained how he’s been preparing for Jacare’s incredible grappling skill.

“He’s a world class grappler and very dangerous on the ground,” Boetsch said of his foe. “Part of the fight game is mitigating risk. I don’t want to put myself in a grappling match with this guy. It would be foolish to think that I’m going to go in there and kimura him or catch him in a guillotine. It’s very unrealistic. That being said, I know that he believes if he can drag me to the ground that’s the end of the fight. Obviously if he can’t hold me down, he can’t win. So I’ve been doing lots of takedown defense, lots of clinch work, lots of getting up off of my back, and lots of being safe. If I can shut down the action – not that I’m one to stall on a position – but if he can’t work from the top position, you know. People have paid good money to see a fight so hopefully the ref will stand it back up. But I’m prepared for anything. If it’s a long, grueling and defensive battle until he wears down a bit and I can put my hands on him in the third round, I’m willing to do that. I sort of like the way the last fight went though, get in there and take my opponent out. Then go celebrate with my friends and family and not have to go to the emergency room.”

Do you think Tim Boetsch can pull off the upset against the dangerous Jacare Souza this weekend? Sound off, PENN Nation!