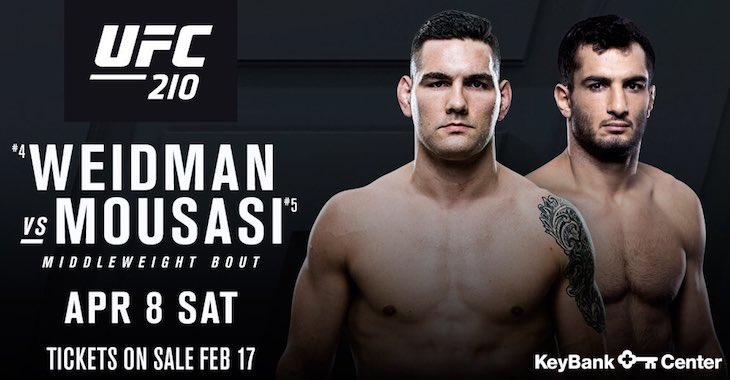 After a brief back and forth verbal battle earlier this month, it has now been officially announced that Chris Weidman and Gegard Mousasi will throw down at UFC 210 on April 8th.

Weidman will be entering into the bout on a 2-fight skid that has seen him drop back to back TKO losses. At UFC 194 in December of 2015, Weidman lost the UFC middleweight championship to Luke Rockhold, before then dropping a KO loss to Yoel Romero nearly a year later at UFC 205 back in November.

Mousasi on the other hand has been on a tear of the UFC’s middleweight division, going on a 4-fight win streak over the course of 2016. Mousasi started the year by picking up a unanimous decision win over Thales Leites, before then picking up a UFC 200 win over Thiago Santos. Following that, Mousasi took a big step up in competition when he fought Vitor Belfort at UFC 204, where he picked up a dominant 2nd round TKO win. In his final fight of 2016, Mousasi avenged his most recent loss as he TKOd Uriah Hall in the 1st round of ‘UFC Fight Night: Belfast. Who do you have winning this pivotal middleweight scrap at UFC 210?