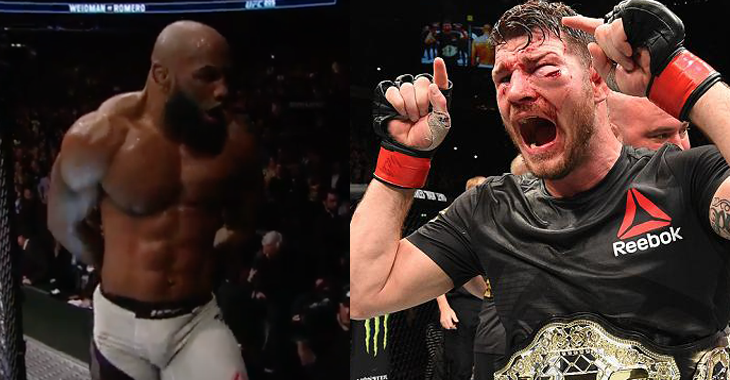 The MMA world is waiting on the official announcement of UFC middleweight champion Michael Bisping’s next title defense.

It sounds like UFC President Dana White has the matchup already lined up as he told Matt Serra and Jim Norton on the latest “UFC Unfiltered” podcast that #1 UFC ranked middleweight Yoel Romero is next in line for Bisping, with former middleweight champion Anderson Silva right there in the mix if he gets his hand raised over Derek Brunson at UFC 208.

“Anderson has gotta get past Brunson and Bisping has gotta get past Yoel Romero,” White said as Serra stated he would be interested in seeing the rematch between Bisping and Silva after their controversial first fight at UFC Fight Night 84.

“Yoel Romero’s been floating out there a long time waiting for a title shot,” White added.

“Bisping wanted to do that grudge match with Dan Henderson. It was going to be Dan Henderson’s last fight, you know what I mean? I’ve always shown Henderson the respect I felt he deserved. He’s a guy who’s fought everybody out there. So we did that fight and he’s got to defend his title now against the #1 contender. I mean, if you look at what Romero did to Chris Weidman, he absolutely deserves the shot.”

With Bisping coming off a recent sugery to fix some minor injuries, Bisping has previously stated that he predicts a return sometime in the Spring.

What are your thoughts on a middleweight title fight between Yoel Romero and champion Michael Bisping? Give us your prediction in the comment section on how and when the fight ends!